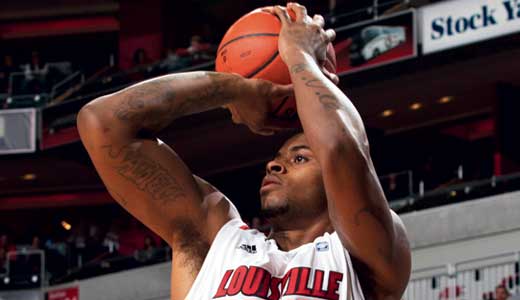 "There are only two great plays,” Adolph Rupp once said. “‘South Pacific’ and put it in the hole.”

Which should eliminate Louisville right off in the NCAA tournament. If the Cardinals were riding in a boat to Tahiti, they couldn’t hit the South Pacific.

On the other hand, a funny thing happened to Louisville last week in New York. The Cardinals dropped a failed patty-cake style that put a premium on shooting, and instead began running the floor like they owned it — sweeping to four victories in four nights in Madison Square Garden to capture the Big East Tournament and stride into the 2012 NCAA Tournament on a roll.

“This is the highest point of our season, and the best place we could be right now,” senior Kyle Kuric told WHAS radio in the happy moments after beating Cincinnati for the tourney title.

Louisville opens NCAA play against Southern Conference champion Davidson Thursday night in Portland, Ore., and by Baron Rupp’s summation should be gone right away. Davidson is one of those put-it-in-the-hole teams, and Louisville is most certainly not. Louisville and coach Rick Pitino have been stung in the tourney before by “mid-major” teams who hit shots, rather than miss them. (Butler, Xavier, Morehead, etc.) But it is unlikely Davidson has seen anything like the heat Louisville can bring. The Deacons just might not get that many shots to hit.

The whole thing is a total turnaround for Louisville, from the gloom and doom of previous weeks at the end of the regular season, in which the team lost four of six games, slowing to a walk most of the time, and shooting like — well, like it couldn’t hit the ocean from a rowboat. Not that the Cards shot that much better in the tourney. They didn’t. But a newfound hustling, pestering, risk-taking full-court press so disrupted its opponents that Louisville could miss two or three, then swipe the ball away for a dunk. Or give it to center Gorgui Dieng, who found a shooting stride to go with his league-best shot blocking.

The high-octane gas in Louisville’s fuel mixture has been the play of diminutive guards Peyton Siva and Russ Smith. No rational basketball mind could conceive of winning in a tall league like the Big East with two such tiny guards, plus another small guard, Chris Smith. But the Louisville guards are able to snake the ball away from opponents. If they miss the steal, Louisville has Dieng and Kuric behind them, plus freshman forward Chane Behanan, one of the finest full-court players in college. That includes offensive rebound follow shots. When a team misses as often as Louisville, it helps to have a guy sticking the ball back in.

Russ Smith is the leader in larceny, forever getting his hands inside the dribbler’s operating territory. He’s in there where he shouldn’t be able to touch the ball, but he does, flicking it away to ignite fast breaks, often taking the ball in himself, crossing from right to left in the lane, then getting up some dink-a-loo shot with his right hand — which isn’t orthodox — but who cares?

As one Louisville fan put it: “When any of the Cards does something spectacular, fans cheer and clap like crazy. When Russ Smith does something, they turn to their friend and say, ‘I love that guy.’”

And it is that kind of happy pitch to which Louisville has tuned itself as it enters tournament play.

But one must be realistic. Louisville met only one of the best teams in the Big East in the league tournament: Marquette. The Cards were handled during the season by Syracuse, Georgetown and Kentucky — all taller teams. Georgetown is a good illustration of the problem. When the Hoyas played here, the 12-man traveling roster listed eight players standing 6-foot-8, or better. None under 6 feet. Against the tall teams, Louisville is outsized.

And Louisville might revert to the patty-cake stall ball that looked so bad in losses to Syracuse and South Florida. Pitino has claimed opponents initiated the sluggish pace, but it was clearly Louisville’s intention to slow the game in search of a low scoring upset.

Louisville also had a poor plan for winning the snail derbies. Its end-of-game play with Peyton Siva going one-on-five got to be a predictable bust. Everybody in the United States of America knew what Louisville was going to do at the end of its games.

But those bad times may well be washed away, with a return to a freewheeling Louisville basketball style of play. Pitino dusted off an old friend, a full-court press, to rekindle the team’s spirit and speed.

And that probably is a very accurate appraisal of Louisville’s chances in the tourney. It’s U of L’s 38th appearance in the tournament, and the record shows that when Louisville is good, it usually does good things.

Louisville (26-9) should handle Davidson (25-7), and maybe the winner of New Mexico vs. Long Beach State, as well. Then Louisville would likely meet Michigan State, the Big Ten champion and No. 1 seed in the West. That’s a little out of reach, we’d think. Michigan State (27-7) isn’t showy, but likely won’t be out-rebounded or overwhelmed by a Louisville press. And would limit Louisville to the shots it doesn’t hit much. Probably the end of the line.

Before going further, just one man’s opinion about the neon orange uniforms Louisville has been wearing: atrocious. And not the school’s colors, which are red and black, like the bird.

Of course, the new uniforms have won four straight games, and the Cardinals can’t suddenly take a chance with changing them. No one changes uniforms during a winning streak. So the team should go on with the things as long as they win. Then burn them.

Baylor has also been wearing the uniforms, in glaring green. After a loss to Baylor in the Big 12 Tournament, Kansas coach Bill Self complained that Baylor’s neon numerals and stripes stood out so much it provided an unfair advantage.

Now for those brackets …

Don’t spend a lot of time looking for upsets. The selection committee has gotten too good at rating the top teams. One may reliably assume the seedings favor the favorites to ensure most will arrive safely in regional finals and the Final Four.

Just look at it. When Western Kentucky won the Sun Belt Conference tourney, you just knew the selection committee would feed the Hilltoppers to Kentucky. A feel-good Bluegrass story that will never come true. Western will have to beat Mississippi Valley State first, but that’s the un-democratic way the brackets work.

None of the four top seeds — Kentucky, North Carolina, Michigan State, Syracuse — is a great team. Kentucky has very good players. But mostly what they all are is solid, and there is little reason to think three or maybe all four won’t advance to the Final Four. Ohio State might beat Syracuse.

Minor upsets, of course, will happen. It’s college basketball, and the sheer number of teams and games sees to that. But off-the-radar giant conquerors are pretty well targeted. So teams like St. Bonaventure, Davidson and South Dakota State are matched against high seeds, instead of letting the thing be drawn at random.

Murray, which opens Thursday in Louisville, is 30-1 and looks like it could make a run. No killers on its side of the West Region bracket. Harvard might be a valuable upset pick. The Crimson is matched with Vanderbilt, which will be over-selected after beating Kentucky.

Speaking of UK, you can go ahead and mail the NCAA trophy to Lexington. The Cats can’t lose. Or can they? It says here the team most likely to upset Kentucky is the one that has already done it: Indiana. The Hoosiers did a lot of things right when they beat Kentucky in December on a three-point shot at the horn.

Shooting is what Indiana does best — put it in the hole.

One of the two great plays.

Get out of the way: Everything falls into place for the Cats under ‘Coach’ John Calipari

Playback: As the Big Dance returns to Louisville for the first time since 1991, LEO looks back at this city’s NCAA Tournament history

InfraRed-colored glasses: The Cards change more than just their uniforms for post-season play