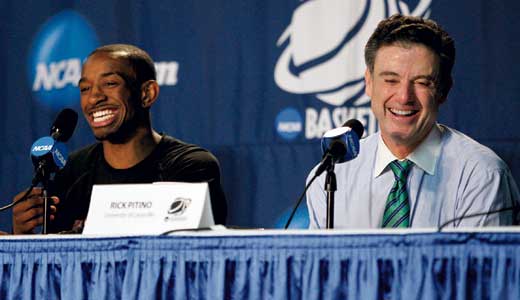 Where were you Saturday night?

While thousands of University of Kentucky basketball fans jammed into the KFC Yum! Center for a “neutral court” NCAA Tournament game, most University of Louisville fans settled for the widest-screen TVs they could find — and maybe their radios — to root for the Cardinals, playing 2,000 miles away in Portland, Ore.

No sour grapes, though. The important thing is Louisville won — beat Davidson Thursday, New Mexico Saturday night, and now moves on to Phoenix for the West Regional.

In the past, Louisville’s NCAA appearances were scheduled closer to home, making for huge fan migrations and road trip adventures. Indeed, this writer’s first glimpse of such outposts as Wichita, Birmingham, Knoxville and Houston came following Louisville to NCAA tourney sites. In Nashville, in 1982, Louisville was expected to face UK for the first time since 1959, but a “dream game” in Music City failed to materialize when the Big Blue mysteriously ran low on electrolytes (Coach Joe B. Hall’s explanation) and was upset by the unheralded Middle Tennessee State. Louisville beat Middle Tennessee, and afterwards students from both schools adjourned to a nearby college hangout, where Louisville guys danced with the MTSU girls and traded T-shirts. Didn’t miss the Cats a bit.

Of course, traveling with a team is mostly limited to the well to do, who can afford it, and college students, who don’t know they can’t. Most folks just see the games on TV. But for all there’s a feeling of following the team wherever they’ve wandered. Especially this bunch: No Doctors of Dunk. More like the Little Engine That Could.

Hampered all season by an anvil-toss shooting touch, and beset by a string of injuries that knocked three players out for the year, Louisville coach Rick Pitino found himself forced into a variety of stop-gap measures to win. Sometimes the schemes didn’t work. But when they made a four-straight run through the Big East Tournament, and found success in the Pacific Northwest, the Cardinal game face changed from grim to joyous.

As Pitino explained the nuances of the assist-to-turnover ratio to CBS reporter Jenn Hildreth following a victory over New Mexico, guard Russ Smith snuck up and flashed bunny ears on his coach’s head.

Even Pitino was all smiles, joking that coaching Smith is like starring in a remake of “One Flew Over the Cuckoo’s Nest.”

In the media interview room, Pitino asked the 5-foot-10 Smith why he passed up a sure two points when he flunked a dunk. “Russ, any 5-foot-10 guy from New York can dunk a ball. Just lay it up and put it in. Why would you do that?”

“You’re right coach,” Smith said. “I should never have put Vaseline on my hands before the game.”

That was it for the press conference. But the show continued on Louisville radio station WKRD-790 AM, where Paul Rogers handles play-by-play and catches the electricity of the game. (By the way, the radio broadcast, which has been delayed as much as nine seconds behind the TV telecast in recent years, is now synchronized with the tube, so you can don your headphones.) Rogers gets excellent help from sports announcers Doug Ormay, Drew Deener and Bob Valvano. Following the New Mexico victory, Valvano talked to Pitino, who was ready to testify.

“I want to win so badly for these guys. I wanted it badly for them last year because they gave so much,” Pitino said. “Fans don’t know … fans just want to win. They don’t care about getting to know the players. (Well, that’s debatable, but never mind.) I know what these guys are all about. They are the highest character people.

“Now, I had a group that went to the Elite Eight, and every single day it was another problem… With these guys you never hear a thing. Drug testing? You never have to be concerned. Grades? How about the highest grade point average in the Big East last year, and probably going to win that again. How about seven guys reading the Bible? I mean, you don’t see this today.

“So I wanted to win so badly — for them to taste it,” the coach continued. “Because going into next year, we’ve got everybody back. We’ve got Luke Hancock sitting out, and now if we’re not tasting it, you’re wasting a chance. They do believe they can get to the Final Four. We’ve been talking about it. Whether we get there or not, now it’s fun. Their eyes are going to be wide open when they get to Phoenix.”

Don’t think Louisville fans were unrepresented way out in the Northwest. Portland resident and Louisville grad Ross Eberman and his wife Cindy snapped up seats and found plenty of allies.

“The Rose Garden was nearly full, and Louisville had a strong section of 500 to 1,000 fans — all in red,” Eberman says. “Peyton Siva’s family was down from Seattle, maybe 20 or 30 of his clan, Samoan-Americans, and they were the best rooters, leading the section. And the way Louisville played. It was great.”

Eberman says the team went straight from the arena to the airport.

“Pitino was joking, ‘I love Portland, and I love the Rose Garden. I don’t like the weather here. I’m leaving.”

“And I see why he and the team left in the middle of the night,” Eberman says. “They could get to their hotel in Phoenix by morning, and then see all the games on Sunday on TV.”

After a few days in the Arizona sun, it’ll be time for a Thursday night showdown with Michigan State (29-7). Maybe whip the Spartans and dance with their girls.

Then do it all again on Saturday against the Marquette-Florida winner.

And what of Michigan State?

If you’ve seen other strong Michigan State teams, you’ve seen this one. The top Spartan is rugged forward Draymond Green, who is surrounded by the usual cast. Coach Tom Izzo doesn’t go for one-and-done stars, so there is tremendous continuity.

That could be a problem for Louisville, which has had success stealing the basketball and stopping three-point shooting. But Michigan State won’t just cave. It won the Big Ten, probably the nation’s toughest college league this season.

But Louisville can’t be counted out. Its guards are small, but resourceful. Chane Behanan is as tough as any Michigan State forwards. The key for U of L might be center Gorgui Dieng. The 6-10 sophomore is a tip-top shot blocker and is starting to score.

Wildcats and Hoosiers Down South

Meanwhile, in Atlanta, Indiana (27-8) and Kentucky (34-2) face off in the South Region semi-final Friday, with a packed house certain.

No. 1-ranked Kentucky is loaded with tall and talented players, including 6-10 center Anthony Davis, who leads the country in blocked shots. Davis’ wingspan extends not only above the rim, but wide across the court — taking away valuable passing space for opponents. Inexperience is probably Kentucky’s most serious problem. Connecticut was too “hard” for UK last year.

But this is a happy Kentucky team that thinks it’s going places.

“It seems like there are no cantankerous personalities that (UK coach John Calipari) has to fight,” Vanderbilt coach Kevin Stallings told The New York Times. “This team seems like they have bought in to what he wants more, and as a result they are having unbelievable results. It seems like their team chemistry is a little better.”

Team chemistry is off the chart at Indiana. The four-time NCAA champion found itself enduring losing seasons after a complete crack up under a previous coach. Now Indiana, which beat Kentucky in December, appears to be back.

The Indiana roster is studded with homegrown Hoosier deadeyes, plus stellar center Cody Zeller. Indiana ranked second nationally in three-point shooting, with several players clicking around 50 percent from the three-point line. Remy Abell, a freshman from Louisville, checks in at 46 percent, fourth best on the team.

In the last minute against VCU, the ball came to IU guard Will Sheehey, who later said he figured coach Tom Crean would probably want to call a time out to set up a final shot. But before that could happen, Sheehey sank a 15-foot game winner: “I knew I’d hit it.”