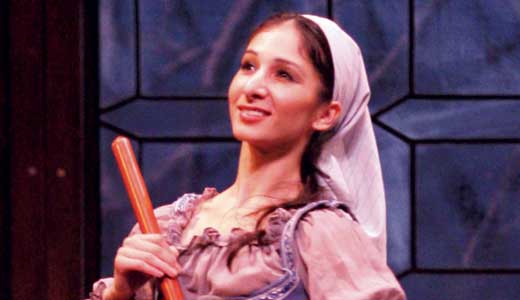 The story of Cinderella is so familiar that comedian Jerry Lewis made a 1960 film called “Cinderfella” and we still understood it. One of the original pure-of-heart dirty girls, Cinderella toils away her days cleaning and scrubbing at the mercy of her mean stepmother and wretched stepsisters. Cue the glass slippers and a prince to give us the happy Disney-fied ending.

But wait, that’s the fairy tale, not the ballet. So maybe the story is not so familiar after all.

The Bolshoi Ballet in Moscow first presented “Cinderella” in 1945. Russian composer Sergei Prokofiev conceived of the three-act ballet’s title character “… not only as a fairy-tale character but also as a real person, feeling, experiencing and moving among us. What I wished to express above all … was the poetic love of Cinderella and the Prince, the birth and flowering of that love, the obstacles in its path and finally the dream fulfilled.”

Fast-forward to 1979, when the Louisville Ballet presented its full-length story version, with choreography by their former artistic director Alun Jones and former principal dancer/associate artistic director Helen Starr. The original 1697 story, “Cinderella or The Little Glass Slipper” by Charles Perrault, was an inspiration. But the more important influence was Sir Frederick Ashton’s 1948 English comedic version of the ballet. (Starr had worked with Ashton at the Royal Ballet.) Jones is back to stage and design on the 2012 Louisville Ballet production.

Ballet versions of the story have some familiar elements — stepsisters, pumpkin coach, fairy godmother — but delete the stepmother, and swap out the glass slipper with a pointe shoe. Best of all, many companies use male dancers to play the stepsisters for comic relief. In the Louisville Ballet’s performances, Eduard Forehand and Brian Grant (and alternates Robert Dunbar and Rob Morrow) are playing the buffoonish stepsisters.

Ballerinas Natalia Ashikhmina and Erica De La O are sharing the role of Cinderella. Both are expressive dancers, giving a full range of emotions with a simple twist of the head or a stretch of a leg. It’s amazing what can be articulated when dancing with a broom (or a hat rack, if you’re Fred Astaire).

We wouldn’t have a sense of closure if Cinderella and the Prince did not dance a pas de deux. It’s the ballet equivalent of film’s hand-in-hand walk into the sunset. With that, we know all is right in our fairy-tale world, and the two will live happily ever after.