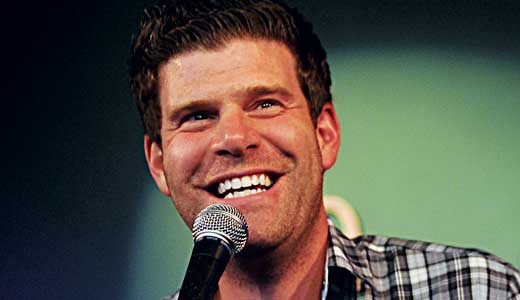 Long Island native Steve Rannazzisi broke out as a cast member on “The League,” FX’s popular and acclaimed comedy series about a 30-something group of friends who are also members of a fantasy football league. He brings his stand-up to The Improv this week.

LEO: When is “The League” back?
Steve Rannazzisi: We start shooting again in the middle of July, and then we’ll be back again in the fall. Right around the time football starts is usually when we come back.

LEO: Do you have any TV or movie projects coming up?
SR: I sold this web series to My Damn Channel that will be coming out maybe middle of April. We haven’t set a launch date yet.

LEO: What’s it about?
SR: It’s called “Daddy Knows Best,” and it’s a series of shorts about horrific parent decisions. It’s about a guy who hasn’t really grown up and now has a son, who’s 3, and has to figure out how to maneuver that life.

LEO: Are you married in real life?
SR: I am, yeah, and I have a 3-year-old, and we have another one on the way in a month.

LEO: Your character is the heart of “The League,” the most normal of all the characters. Do you agree?
SR: (laughs) Yes, I kind of do agree with that. Though, the fact that I’m the most normal person on the show is very scary. I guess you would consider me the adult of the group, the closest thing to an adult that our group of friends has.

LEO: As a stand-up, how normal can you actually be? I guess you’re a really good actor? Or are you one of the more normal stand-ups?
SR: I feel like I am more on the normal side of stand-ups. My parents are still together, I like them, I’m married, I’ve got a kid, I don’t really have a drug problem … I’m sort of more normal, but I have anger issues. I’m probably bipolar, if I really looked at it, but I won’t, because … why?

LEO: What kind of anger do you have?
SR: Things make me upset, and I have to learn patience. I don’t deal with mistakes very well. I mean, I don’t, like, hit people, but I get frustrated very fast.

LEO: That sounds pretty normal for a stand-up.
SR: Yeah, of course — that’s what makes us really observational. The stuff I talk about is what upsets me sometimes … what’s making me upset, and why it’s making me upset.

LEO: How long have you done stand-up, and how has it evolved as you’ve learned?
SR: I’ve been doing it a little over 10 years now, and I realized, I’m just now finding my voice. It takes a long time. I did well for a long time, but doing well and enjoying your time on stage sometimes aren’t the same thing. You can do well and figure out tricks and things, but I’ve been going through a growth spurt lately, where I’m trying to do more stuff I find interesting — and also helping the audience find it interesting, as well. I think that in the last couple of years I’ve really found my voice. It’s specific to who I am, which is what I’m enjoying about it right now.

LEO: Do you think you’ve gotten more confidence from being on a successful show, where you’re encouraged to improvise a lot?
SR: Yes and no. Yes, because it’s nice to have people in the audience who know who you are, who came specifically for you. Then again, I feel like there’s more pressure now. People pay good money to come out and see you. You want to put on a good show and have everyone enjoy it, so I find that to be a little more stressful. Confidence comes from knowing that what you think is funny other people think is funny, too. I do have more confidence on stage, but it’s because I’m more comfortable on stage.

LEO: Anything else you’d like to say to Louisville?
SR: I’m psyched to come back. I haven’t been there in, like, three years. I’m hoping that Louisville is still in the NCAA Tournament when I’m there.