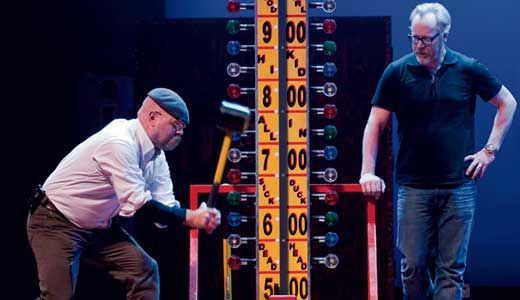 Jamie Hynemen and Adam Savage, better known collectively as “The Mythbusters,” stars of the hit Discovery Channel show, are almost single-handedly responsible for turning geek into chic. Every week, Jamie and Adam, along with a crack team of cohorts, go to outlandish lengths in an attempt to answer the big questions in life. This weekend, they bring TV to the stage at the Louisville Palace. Adam and Jamie took time to talk with LEO about what we can expect.

LEO: This tour seems like a great idea. Where did the idea come from?
Adam Savage: We’ve been doing public appearances since the beginning of “Mythbusters,” like 2003 or 2004. And over the years, we’ve done dozens and dozens of them, and every time people want us to come “bust” myths on stage. And we routinely turn that down, specifically because it’s weird and it’s not what we do.

I like to point out that most science programming is what I call “demonstration programming,” where the host talks about a specific scientific concept and then demonstrates it on stage. We are an “experimentation program” — we don’t know what we’re getting with our experiments, so we’re figuring it out as we go. So the idea of augmenting the normal type of appearance we do, which is a supervised Q&A, to doing something more exciting and enticing was always on our minds.

LEO: Are the myths we’ll see on stage similar to anything on the show?
AS: Ah, I should explain. We are not going to be mythbusting on stage. That was the one thing from the outset that we knew was not going to be feasible. Like I said, what we do on the show is genuine experimentation, and if we were to try and do that sort of thing on stage, we could very plausibly end up waiting for an hour for something to happen, and that just doesn’t translate into an exciting theater experience.
Jamie Hynemen: We are experimenting with them to some degree, but as Adam said, we can’t just have an unknown outcome. What we can have is some variation in the results that we can count on. But it is as close as we can come to actually doing experimentation on the stage.

LEO: Will there be a splash zone? Like a Gallagher show?
AS: (laughs) No, it’s not a Gallagher show. Whatever safety equipment is needed by the audience … we provide it.

LEO: Does being on the road 24/7 change your dynamic as opposed to just working together in the shop?
AS: Actually, it’s sort of funny — on the road, we only really see each other two hours a day during the actual show. For the most part, we take the bus to a new city, we hang out there during the day, maybe exchange some notes on something we want to change in the script. But other than that, we don’t really see each other until soundcheck. After that, we roll through the show, then we go back to our buses, go to sleep, and ride to the next city. So in fact, it’s a lot less daily contact than we normally have.

LEO: How do you occupy the time on buses and in airports when you’re on the road?
JH: Actually, we’re quite busy in production with “Mythbusters,” which involves a fair amount of planning we keep ahead of. We’re also producing two entirely new series for Discovery — one that is going to air in March, and the other one is in development; so we’ve got our hands full.

LEO: Now that you have been touring for a bit, are there any rock star myths that have been busted for you?
AS: I would say that on the road, we keep a pretty quotidian existence. We’re very lucky this happened to us later in life so we’re not busting out in cities partying — we’re pretty much sitting on the bus and reading.

LEO: Is it hard being away from your families?
JH: We have our own rooms on the buses, and stuff like that — so it’s fairly cozy — but it’s nicer at home.

LEO: You all do Q&As during the show. Are there any questions you’re tired of answering?
JH: That’s actually one of the nicest parts of the show, because we love interacting with the audience, and you never know what to expect. There are some questions we get a lot, like what our favorite myth is. But we actually enjoy talking about it, so nothing is out of line at all.