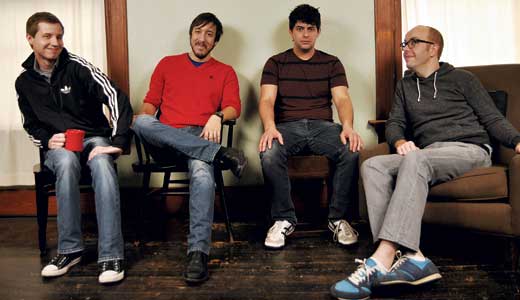 Local indie pop/rock quartet Go Mordecai! would like you to know something: “We are very excited about the upcoming show at Zanzabar with Cloud Nothings and The Deloreans (on March 21). It is guaranteed to be a wild time. (We are legally obligated to disclose that Go Mordecai! cannot guarantee that the time will be ‘wild.’)”

LEO spoke with the members about their recent EP, Baseball Weather, the movie that inspired their name (it was “The Royal Tenenbaums”), and other things that are things.

LEO: How do you feel about baseball and/or weather?

Zach Driscoll: Well, the seasons are pretty important … and the weather changes as we enter different seasons … and the weather dictates whether we’re going to play baseball or not … Does that answer the question?

LEO: How do you feel about pog?

Kyle Mann: Some fads capture the imagination of America’s youth, swell to unseen heights of popularity, and weave themselves into popular culture for the future. That’s how we feel about Trapper Keepers. Pogs were cool, too, we guess.

LEO: Why isn’t Louisville more of an indie pop/rock town?

Dash Moss: That’s a good question. There really are plenty of great indie rock groups in Louisville. If we had to guess why it isn’t as prominent around here, it’s probably because not enough people have seen Loren Pilcher (of The Deloreans) play guitar with an awesome mustache. (Loren has the mustache … not the guitar.)

LEO: Your name comes from an influential movie. How does it suit you?

Lance Swan: A band name is more of a “brand name.” Our integrity and ability is sketchy at best, that’s why we have borrowed some of Wes Anderson’s.

Learn more about the band at facebook.com/gomordecaiband, and more about Trapper Keepers at meadonline.com/trapper/home.aspx.