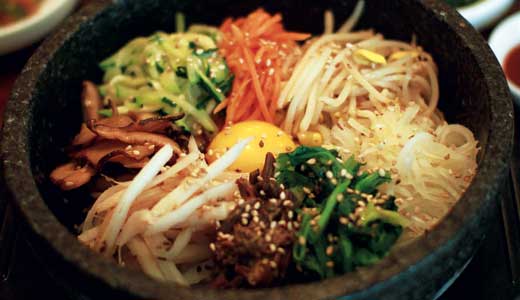 Even if you don’t have much experience with Korean food, you’ll find it easy to like, especially if you try it at an eatery as amiable as Charim.

For the most part, Korean dishes won’t seem unfamiliar to anyone who enjoys the varied cuisines of Asia. Some of its dishes seem to bear a resemblance to familiar Chinese fare; other items might remind you of Japan. Overall, there’s a robust, hearty and often spicy character that’s all Korean.

And one small delight makes Korean dining special: Call it banchan or panchan, in Korean, if you like, or make it easy on yourself and call it “all those little dishes of veggies, noodles and fiery relishes that they serve at Korean restaurants.”

Those little dishes are delivered to your table soon after you arrive and settle in, much like chips and salsa at a Mexican restaurant. Which raises a question: Is there a proper way to enjoy them? Is it appropriate to start nibbling right away, finishing them up while you wait to give your order? Or should you save them to enjoy with dinner?

Good news: It doesn’t matter. They’re snacks! They’re condiments! You should try adding bits of your favorites to each dish as your taste buds suggest, but if you nosh them all up right away, there’s no need to be shy about asking for more.

Banchan come in a bewildering variety, and Koreans may spread a table with a dozen or more. We were given about seven dishes with dinner, a traditional mix of bean sprouts, greens, noodles, cabbage, cucumber, fried peanuts, fish cake and kimchi, Korea’s trademark spicy fermented cabbage. Some were salty, some sweet, a few fiery, a couple cool, all good. We ate them right up and got refills promptly.

Charim’s menu is relatively brief but offers a good choice of Korean cuisine. About a dozen appetizers are $5 (for edamame, soybeans in the pod) to $11 (for pajeon, a Korean-style pancake loaded with calamari, shrimp and fried mussels). Wings and hot wings, listed separately from the other apps, are $6 for an order. About 18 main courses, including a half-dozen meal-size soups, run from $7 (for mild or spicy ramen noodles) to $18 (for kal-bi, thin-sliced marinated and grilled beef short ribs), and $30 for a pricey outlier, agwijjim, made from the deep-sea angler fish.

We nibbled our banchan, then moved on to a pair of filling appetizers. Kimmari ($6) consisted of ping pong ball-sized nuggets of thin rice noodles wrapped in seaweed, then lightly dredged and fried, tempura-style. Salty, fried and crunchy — what’s not to like? Tteokbokki, described as “rice cake and vegetables,” was a little more exotic. “Rice cake” proved to be glutinous, chewy white rice paste formed into pencil-thin, 2-inch lengths, served with thin sheets of fish cake, crunchy lettuce and onions in a fiery hot reddish-orange sauce that got the endorphins pumping.

A Charim signature dish, hot stone bibim bab ($13), is served in a traditional stone bowl that’s fired in the oven until dangerously hot, then loaded with white rice and topped with a composed array of sliced mushrooms, cucumber, daikon radish and carrots, edible seaweed and a whole, raw egg yolk at the center, sprinkled with black and white sesame seeds. Let it sit at your plate for a few minutes so the rice touching the stone will sear into a crunchy crust. Then use your chopsticks to stir it all together, using the hot ingredients to cook the egg into a rich sauce. It was prepared with care and beautiful to behold, but even with a side bowl of spicy-sweet bean sauce added, it needed plenty of kimchi to kick the flavor up to where I expect a good Korean dish to be.

Service was a delight and the food was good, although I wondered if management was erring on the side of caution by keeping Western diners safe from overly fiery experiences. With the exception of the rice cake appetizer, our choices struck me as somewhere between delicate and bland, without the bright, robust flavors that I associate with Korean at its best.

Still, Charim is a keeper, and I hope it sticks in an iffy location that has seen a half-dozen predecessors fail, perhaps stymied by parking competition in a short strip that also houses popular Havana Rumba and Del Frisco’s.

Nevertheless, there’s a lot to like here, and the price is right, as our filling dinner rang up at just $40.28 before tip.