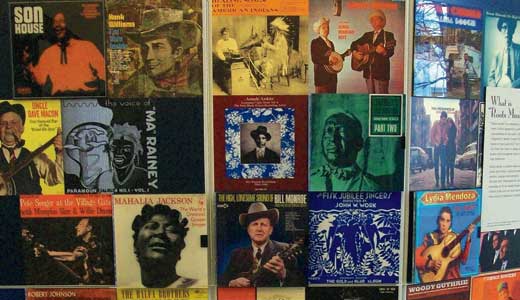 A new exhibit in the Oldham County Historical Society in La Grange explores the ethnic, regional and rural history of American music, from 18th century shape-note hymn singers to the current-day roots revival sounds of Alison Krauss, The Klezmatics, and Steve Riley and the Mamou Playboys.

“New Harmonies” is a Smithsonian traveling exhibit meant primarily for rural audiences in small towns without greater access to cultural programming. Dr. Nancy Stearns Theiss, Historical Society executive director, acknowledges that La Grange serves as a bedroom community for Louisville, but maintains that it also coexists as a rural small town, closer in spirit to neighboring Henry and Trimble counties.

The exhibit offers expected instruments like banjos and harmonicas with some of their less famous cousins, such as a Native American flute and a Diddley bow, an African proto-guitar made with a single string on a wooden board connected by two screws. An ancient radio broadcasts music from the “Grand Ole Opry,” while listening stations play examples of everything from singing cowboy songs to polka dances.

The Historical Society is home to one of the world’s largest collections of whiskey jugs, and they have wisely connected their jugs to the jug bands that began in Louisville almost a century ago. Guests are given complimentary kazoos and encouraged to play them while examining the jug band history lesson. Theiss hopes to work with the National Jug Band Jubilee festival later this summer.

Another local collection features displays of music like Dick Kallman’s 1968 “Oldham County Line” single, and a pair of guitars recently made by Oldham County Jail inmates out of materials like twisted trash bags, pizza boxes and pencils. Serious researchers can study the works of Louisville native Will “Shakespeare” Hayes, who wrote hundreds of songs in the 1800s, including “Evangeline” and, he claimed, “Dixie,” though that was never resolved.

There are album covers, famous and obscure, and tribute is paid to Alan Lomax and Moses Asch, 20th century documentarians of rural music. About the latter, the New Orleans writer Tom Piazza is quoted, “By taste and political conviction, Asch was attracted to the raw and the otherwise unheard,” and this exhibit does an admirable job of educating non-music geeks about important but perhaps under-praised pioneers like blues father Charlie Patton, gospel legend Thomas A. Dorsey and Tejano great Lydia Mendoza. (Those unfamiliar with the term “Tejano” can learn more at the exhibit.)

“I didn’t know the difference between Cajun and Zydeco” before the exhibit, says Theiss, and now she can answer those burning questions one might have on the topic.

A concert series at the nearby Irish Rover, Too restaurant, curated by Tom McShane of Crestwood’s Hewn from the Mountain instrument store, will accompany the museum’s work, featuring various forms of roots music from African-American spirituals to Irish harp, Saturday afternoons through April 21.

Theiss is also excited about their “April Fool’s Weird Music Competition.” The March 31 contest at the Oldham County Schools Arts Center will offer a $1,000 cash prize to the “winner,” proving that even Oldham County is joining the fight to keep Louisville weird.