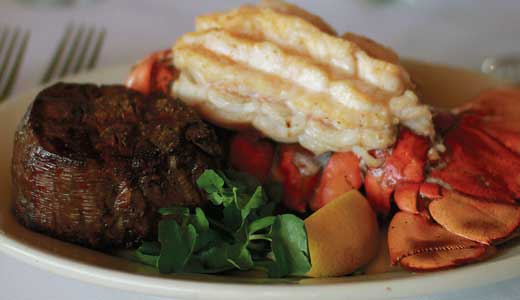 Let’s consider the economics of steak. Hungry for a sizzling rare boneless strip? Meijer had USDA choice for $7.99 a pound this week. (Kroger had flatiron, a chunk of chuck, for just $5.99 a pound, but let’s keep things upscale with strip or rib eye.) Bring it home, slap it on the grill, add a potato and a salad, and you’ve got steak dinner for two for $10. Such a deal.

Now let’s tinker with this scenario. No feedlot beef from industrial farms, pumped full of bovine growth hormone and steroids for me. Nope, make mine grass-fed, please, and additive-free. Easily done, but you’ll pay for the privilege: Whole Foods will sell you a pound of all-natural strip steak for $16.99; add $5 for dry-aged.

You’d rather have it locavore? Me, too. Head for a farmers market where the nice folks from Dreamcatcher, Fiedler, Stonecross and other local farms will fix you up with a hormone-free, humanely raised chunk o’ cow for prices competitive with Whole Foods.

You’d really rather go out, you say? OK, but prepare for sticker shock. High quality beef prepared to your liking in a high-end steakhouse is going to cost real money.

For the record, you can get a porterhouse steak at Ponderosa for $12.99, or $3 more with buffet privileges. This gets you a pound of cow, cooked and served with all the trimmings, for less than you would pay for the raw meat at Whole Foods or a locavore farm stand. If this suits you, then bless your heart.

In short, upscale steakhouses aren’t cheap eats. You dine here knowing the price will be high and that this toll will purchase a memorable meal of highest quality, with suave, sophisticated service appropriate to the fare.

Which brings us to Z’s Oyster Bar and Steakhouse, where we gathered a party of nine for a dinner that proved pleasant enough, but that lacked the high level of food and service I expect when the steaks range in price from $32.95 to $60.95. Z’s is also rightly known for seafood and fish as well as fine steaks, chops, lamb and veal, and it’s always worth checking the specials to see what’s fresh.

As is typical of upscale steakhouses, this suck-in-your-breath pricing is a la carte, so expect to pay significantly more if you wish more than a solitary piece of fish or meat with watercress garnish on your plate. Appetizers range up to $14.95; salads are mostly $8.95, and sides large enough for two to share are $5.95 to $7.95. There’s full bar service, of course, and to its credit, the extensive wine list includes some interesting selections fairly priced in the $30 and $40 range along with the steakhouse scene’s customary three-figure trophy wines.

So how was the steak? Umm … On the plus side, a small prime aged filet mignon ($32.95) came medium pink as ordered, and its flavor was first-rate. Unfortunately, however, it was poorly trimmed, containing an inedible lump of gristle. Worse, it arrived at the table at cool room temperature. Steakhouse fail.

Much of the rest was hit or miss. Cornmeal fried oysters ($12.95) were crunchy and delicious. Veal sweetbreads ($13.95) were well prepared. Mushrooms “Colgate” ($7.95) featured five or six brown mushroom caps stuffed with what appeared to be frozen spinach and molten grated cheese. A “wedge” salad ($6.95) was properly retro, crisp and fresh, with pale winter tomato, shredded cheese, crunchy croutons and a strip of bacon to make it a “BLT.” A Caesar ($8.95) was unexceptional, as were sides of sautéed spinach and onions swimming in spinach water ($6.95), creamed corn loaded with cream and butter ($6.95), and diner-style hash browns topped with melted cheddar ($5.95).

Dover sole, lightly dredged and sautéed, finished at tableside with lemon butter ($39.95) drew two thumbs up, as did Z’s crab cakes, a hefty pair of mounds of lump blue crab ($29.95).

The signature dessert, single-portion soufflés ($8.95), earned considerable praise; I didn’t hear any complaints about the cheesecake or key lime pie, either.

Service was usually at hand but not always winning. On one hand, I had trouble getting silverware replaced or putting in a wine order; on the other, a server seemed so concerned about keeping my water glass topped off every time it got down a half-inch that he repeatedly threatened my ear with poorly timed pitcher jabs.

Our share of dinner for two came to about $140, plus a 20 percent tip. For that toll, I wanted better. It felt a little too much like having great seats at the Yum! Center, only to watch U of L lose to Georgetown.