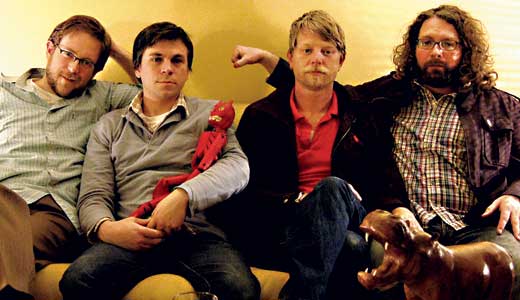 Describing the unusual mixture of sounds making up the stew in Whistle Peak’s indie pop is difficult, but their music is tasty and intriguing, and even more so in their second album, Half Asleep Upon Echo Falls, out this week on local label Karate Body Records. LEO spoke with singer Billy Petot.

LEO: How did the new album come together? How do you all write?

Billy Petot: David Boston and I began working on the songs for this album as soon as we released our debut in 2008. We realized people liked what we were doing, so that motivated us to start writing with an audience in mind. I can’t say the same about the first album; we didn’t really imagine much of an audience when we wrote those songs. I like to say that this time around felt much more intentional, rather than the first, which sounds more aloof to me.

Usually, David or I will write a song, maybe lay down some groundwork, if we have any ideas, and then we bring in Jeremy Irvin, who contributes a great deal, and just see where each song takes us. Sometimes Mike Snowden will come record some bass lines, and a song will take a new direction. We never know what it is going to sound like until we start laying it down. It’s really about experimentation and improvisation.

LEO: Whistle Peak doesn’t sound like many other bands, indie or otherwise. What do you hear when you hear Whistle Peak?

BP: I hear some strange amalgamation of everything. Spaces bleeding across boundaries. The old made new … I refer to it as “electro-folk.” Kevin Ratterman, who mastered both albums, once called it “hi-fi-lo-fi.” Our buddy Tim Stratman calls it “future hits.”

LEO: Where do your songs come from? What inspires you?

BP: Our loved ones. Our love of nature. Relationships. David and I have been close friends and songwriting partners since high school, so he inspires me a great deal. I like to think he’d say the same. The music of others certainly inspires us. When I hear something I really like, I immediately want to sit down and write some that makes me feel that way again.

LEO: Where did you record it?

BP: David records it all at his home with some less-than-stellar equipment. We’ve been using the same Gateway computer to record on since 1999. Before that, we were recording on analog 4-tracks and stuff like that, so I think we prefer that sound of being homemade in a way, of just using the tools we have handy, whether that is a pot, a paintbrush or tea kettle. This time around, we wanted to do things the same way but try and make it sound professionally done — radio-friendly, I guess — or at least as though we spent a lot of money, which we did not.