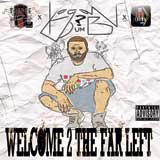 Not long after releasing a group album with Jas’K as Triple B, Kogan Dumb learns from the missteps of that debut with Welcome 2 the Far Left, a solo shot that sounds years beyond where he started. While still overstuffed, with 21 tracks, there’s more than enough solid material here to make you want to keep up with future endeavors by Kogan and crew. The smoky haze of the earlier record is forgotten here; Kogan is focused, man. The concepts are fully fleshed out, with far more quality control than before. From “Zombies,” a piano-led declaration to the droning, walking-dead following of modern hip-hop, to “Don’t Wanna Go,” a Mobb Deep-esque mood piece, this is a record worth spending some time with. Sure, cut four or five tracks, but he’s come a long way in a short time. Keep your ears open.