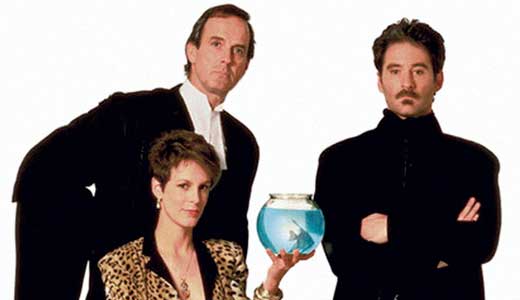 Finally, a Blu-ray version of the movie that made Kevin Kline a star. He, vivacious Jaime Lee Curtis and Monty Python vets John Cleese and Michael Palin team up for a completely ridiculous crime-caper centered around the recovery of a cache of stolen diamonds. But the plot is just a most meager of skeletons upon which to hang layers of perfectly written and wildly exaggerated comedy that builds to a slam-bang (and steamroller!) finish. Lots of commentary, featurettes and deleted scenes for the button-obsessed.

LADY AND THE TRAMP

Absolutely perfect filmmaking and one of Disney’s most requested features, now in a three-disc Diamond Edition Blu-ray/DVD combo. Some great canine croonin’ carries an uptown bitch, Lady, to her lowdown lover-dog, Tramp. To not own this flick is to be guilty of inner-child abuse. Go buy it before we turn you in.

An ambitious and intelligent indie drama about a guy (Cam Gigandet) whose birthday horoscope prediction fails miserably, sending him on a quest to prove, once and for all, whether our fates are written in the stars. He does this by seeking out three people with the same birthday as himself (Jena Malone, Brooklyn Sudano and Max Hartman), but what they reveal about life and love are truly unpredictable and surprising. At least by earthly standards. Worth checking out.

Observers of Internet evolution, those of us who have witnessed the rise and fall of cutting-edge dot-coms and now-irrelevant social media, will enjoy this look at Andrew Mason, the unaffected founder of Groupon.com, “the fastest growing company ever” (Forbes magazine). The guy clearly hasn’t a freakin’ clue what he’s doing, but seems to be having fun doing it — until he’s questioned about high-stakes legal, business or financial dealings, then it’s deer-in-the-headlights time. Run, dude! Run!

We expected to grumble something about “once to the well too often,” but there’s nothing to be Grinchy about in this fun return to form by stoners John Cho and Kal Penn as they set about trying to replace Harold’s father-in-law’s prize Christmas tree — which literally goes up in smoke. All the usual suspects return, plus a few new friends. Hey, it’s Harold and Kumar! What more could you possibly want?

A sneaky, hi-brow bit of historical sleuthy drama that explores the question, “Who, in reality, was the author of William Shakespeare’s plays?” Wonderfully decadent, with popping bosoms aplenty, sword fights, incest, skullduggery, institutionalized rape and other Elizabethan specialties served up by Vanessa Redgrave (who croaks), Rhys Ifans, Sebastian Armesto, Rafe Spall and others. A bit ridiculous at times, but crackling fun.

Adventurous foodie and occasional nut-job Andrew Zimmern continues his quest for the world’s most delicious bugs, grubs, worms, fecal matter, dirt, slime and mold, all of which disappears down his gullet with great gusto. (And, on very rare occasions, comes back up again the same way.) Beware: This guy’s infectious enthusiasm will send you out into your backyard with a spade and a dinner fork.

Arguably one of the best “CSI” episodes, the nail-biting two-part finale to their fifth season (before the show jumped the shark), now available in a Blu-ray/DVD combo pack. Directed by Quentin Tarantino, Nick Stokes (George Eads) is kidnapped by a man who holds a grudge against him and the entire CSI team. Waking up in a demonic Plexiglass coffin, deep beneath the desert soil, his every cry is transmitted to CSI headquarters via the Internet. A clever, terrifying entry that shows just how entertaining TV can be with the right people on board. Recommended.

FRED 2: NIGHT OF THE LIVING FRED

We love the title of this kidvid, a sequel to 2010’s “Fred: The Movie,” based on the TV series “Fred” starring Fred Figglehorn. (OK, we won’t say “Fred” again.) Originally a serio-comic YouTube show about a 6-year-old with anger management issues and an alcoholic mother, this latest outing finds him battling her new boyfriend, who seems to be a vampire! We liked it.

Clemente is a quiet, dark moneylender in Peru whose hooker-girlfriend has run off and left him with their infant love-child. His matronly, ultra-religious neighbor Sofia helps care for the baby while he searches for the mother. But watching the tenderness of the two together leads to a re-evaluation of his life and his relationships with the people around him. A popular and entertaining Spanish arthouser with subtitles.

THE PHANTOM OF THE OPERA AT THE ROYAL ALBERT HALL

A mega-budget performance of Andrew Lloyd Webber’s over-the-top musical, performed in London’s famed Royal Albert Hall. While billed as the largest-scale “Phantom” performance ever conceived, it is nonetheless intimate, earthy and raw, with Ramin Karimloo as the Phantom and Sierra Boggess as Christine. The hall, itself, even becomes one of the performers, requiring a very different “chandelier” scene than you may remember, and much more elaborate staging.

A two-man HBO verbal drama from dark author Cormac McCarthy (“No Country For Old Men”) starring Samuel L. Jackson and Tommy Lee Jones. Jones plays a nihilistic, suicidal college professor who jumps in front of the titular train; Jackson is a Bible-thumping ex-con who saves Jones’ life, all the while talking to Jesus. Can Jackson convince Jones that life has meaning, or is Jones destined to eventually take that 5:15 to Squish City?