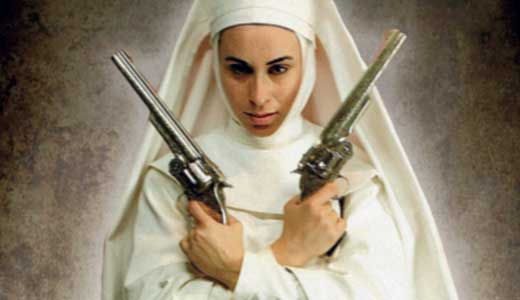 With a title like that, who cares what the movie’s about? Innocent Sister Sarah (comely Asun Ortega) discovers that her convent is overrun with sadistic drug-pushing predators. She prays for guidance, and God sayeth unto her, “Lock and load, girlfriend!” Ditching her habit, she unpacks her trusty 44s (she’s also got a gun) and embarks on a holy ass-kicking in the best grindhouse tradition. Not to be missed.

DOCTOR WHO: THE DOCTOR, THE WIDOW AND THE WARDROBE

The “Doctor Who Christmas Specials” have become a welcome tradition, especially during the Doctor’s latest incarnation on the BBC. This one features Matt Smith and Karen Gillan in a tale that, frankly, starts off kinda slow but finds its legs after the children wander into his hyperdimensional Christmas gift and find themselves 3,000 years in the future on a beautiful, heavily wooded planet. Another smashing episode with lots of terrific bonus goodies.

MAMA, I WANT TO SING!

A riotous vocal onslaught of gospel and pop music inspired by the hit off-Broadway play and starring mono-monikered major babe Ciara (seriously, dude, you gotta check this out!), Lynn Whitfield and the awesome musical artillery of Patti LaBelle. After the death of her husband, Whitfield finds herself a reluctant preacher and the single mom of a pop star. But some in the congregation don’t think much of all that secular devil music.

While “found footage” movies aren’t generally our cuppa-java, this flick succeeds by doing more than just jumping out and saying “boo” every so often. It focuses on a pair of children who have an unseen playmate: an invisible force that lives in their house and plays with them. Sometimes, they capture it on their home-video camera. Features the most intense climax of the series.

This is, hands down, our favorite Robin Hood series. Set 2 comprises BBC Seasons 3 and 4, seen in the United States on Showtime in the late ’80s, with Jason Connery taking over the lead from Michael Praed. Here, Sherwood is a magical, pagan world under the watchful eye of the mystical Herne the Hunter. When Sherwood is invaded by the Normans, he chooses a champion to fight for the soul of the forest and all those who believe in it. These discs are even cleaner than Showtime’s original broadcasts, and all feature the wondrous music of Clannad. A must-own.

One of the best comedies we’ve seen in a coon’s age. Daniel Raymont plays a fading screenwriter who has an odd stroke of … luck? … when a serial killer steals his car — and his latest script — while traveling cross-country. To say more would spoil the fun. Check it out.

THE DAVID SUSSKIND SHOW: HOW TO BE A JEWISH SON

Very possibly the single funniest 90 minutes ever recorded. The remarkable Susskind had an odd — but very entertaining — talk/interview show on WNTA-TV in NYC, often broadcast live. And on Nov. 29, 1970, Susskind assembled Mel Brooks, David Steinberg, George Segal, Stan Herman, Dan Greenburg and Larry Goldberg for a discussion about what is was like growing up Jewish. What happened next made TV history: Brooks and company went completely insane, taking over the show and causing the switchboard to be swamped with calls complaining that it was vile, vulgar and disgraceful. Trust us, you won’t be disappointed.

Let’s face it, the undead have been done to death lately. That’s why we were so surprised by this tale of a U.S. soldier who joins forces with an African soldier, and together they battle their way across zombie-infested sub-Saharan territories. The landscapes, rivers and cities of the Dark Continent are the perfect place to battle zombies, but this is as much a trial of emotions as it is survival. Recommended.

The original “Human Centipede” was the most revolting, disgusting and (embarrassing to admit) funny movie we ever saw. In that one, a demented scientist stitches three hapless naked people together — anus to mouth — to form one 12-limbed crawling monstrosity. We threw up. Here someone makes a longer one out of 12 people. We may never eat again.

The first chapter of the conclusion to the “Twilight” trilogy. If you need a synopsis, you’re as old as we are and won’t give a damn, anyway. For the rest (spoiler!): Bella and Edward get married, there’s some broadcast-TV lovemaking, she gets pregnant with a potentially demonic baby (been there) and starts wasting away while Edward and Jacob emote. The baby is born in a bloody climax that leaves Bella alive but “altered.” The conclusion is due in theaters in November 2012.