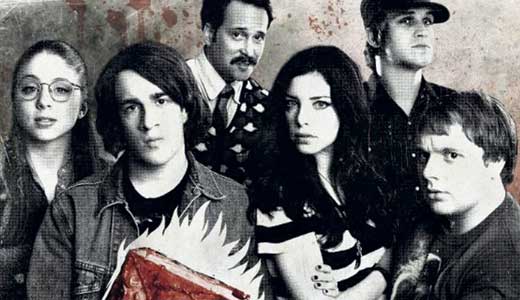 Todd & The Book of Pure Evil

Despite being two (over)grown men, we went to the theater to see this damn fine spin-off of the “Shrek” franchise — and saw quite a few adults doing the same thing. A terrific original tale of heroism, loyalty and truly bad puns with great music and voice work by Antonio Banderas, Salma Hayek, Zach Galifianakis, Billy Bob Thornton and Amy Sedaris. Puss is tricked into stealing magic beans so that Kitty Softpaws can steal golden eggs for Humpty Dumpty, a bad egg and former childhood friend of Puss. Go! And watch it without shame (guitar strum).

TODD & THE BOOK OF PURE EVIL: THE COMPLETE FIRST SEASON

Dennis Quaid is brilliantly scary as the town undertaker and former athletic star with a sick, murderous hobby in this oddly paced R-rated thriller aimed at teens. Tony Oller and ravishing Aimee Teegarden are part of a group that sees a friend murdered by Quaid, but when the town adults ignore their accusations, Quaid begins openly taunting them — and selecting his next victim.

CLASH OF THE TITANS

First Blu-ray release of the CGI-animated tale of Perseus, previously envisioned by stop-action master Ray Harryhausen in 1981. Not a remake despite being based on the same myths, this version pits Sam Worthington and Gemma Arterton against the monstrous hordes of Zeus and Hades, played by Liam Neeson (who doesn’t really pull it off well) and Ralph Fiennes, with Alexa Davalos and Izabella Miko as eye candy. Fun.

What a hoot! A trio of beautifully lethal bitches hides out in a little seaside town where they dedicate themselves to killing men, corrupting the local virgin — blonde and winsome Kyrie Capri — and ignoring warnings about the local sea-monster in this indie exploitation cheapie with no tits but lots o’ blood.

Nominated for every freakin’ award known to man, Martin Scorsese’s 3-D fantasy, inspired by real events, is a delight for the eyes, if a bit long for kids. But you can forgive the director for getting carried away. It’s a romp through his favorite subject: the magic of movies. A bright orphan (Asa Butterfield) secretly lives behind the walls of the Paris train station until he is discovered by Chloë Grace Moretz. But the heart of his magical clockwork world is a broken mechanical man his father left him, and somehow the girl is the key to fixing it. Chloë is excellent as always, with Ben Kingsley as the toymaker with a secret past, and Sacha Baron Cohen as the bad guy. Recommended.

I MELT WITH YOU

A quartet of former college buds gather to do lots of drugs and stare down middle-age in this adult-guy drama starring Thomas Jane, Jeremy Piven, Rob Lowe and Christian McKay. Their lives are more or less successful, but each feels empty, shallow and unfulfilled — plus there are some serious skeletons in their shared closet. It all goes to hell when Sheriff’s Deputy Carla Gugino shows up.

JACK KEROUAC: KING OF THE BEATS

A retitling of his 1985 “Kerouac, the Movie,” this award-winning bio-doc by John Antonelli is perhaps the most intimate portrait of Kerouac, author of the seminal “On the Road,” that you’ll ever see. It covers everything from his nearly incestuous relationship with his mother, to comments by friends Allen Ginsberg, Lawrence Ferlinghetti and William Burroughs, to even what TV program he was watching when his liver exploded and he died, puking up blood. But that’s just the way you’d want it to be, if you’re a follower of Kerouac.

Rowan Atkinson returns as Johnny English, his slapstick homage to 007. With far more action (and actual plot) than the 2003 original, this is a much better film, with far less of Atkinson’s sometimes overbearing camera-mugging and weird mannerisms — it’s more comedy and less clown. And what a cast! Gillian “Agent Scully” Anderson shows great comic chops as his new boss, and Rosamund Pike makes a perfect hot girlfriend. A well-deserved reboot for Atkinson.

Supposedly shot without a script, this campy, cheesy martial arts actioner is all but irredeemable — until Marko Zaror starts kicking ass! The Chilean former fight choreographer knows his stuff and performs with an effortless grace that borders on the poetic. Not the greatest movie we ever saw, but perfectly captures a talent we’ll be seeing more of.

An all-but-unknown male adult comedy about facing down the Big 4-0. Four steadfast NYC bachelors — Benim Foster, Mark Giordano, Jesse Joyce and Matthew Rauch (from “Frankenfish”) — discuss sex, face tragedy and consider the many meanings of life — big and little — while trying to get laid.

THE MYTH OF THE AMERICAN SLEEPOVER

Devotees of HK director Johnny To will tell you that there are only two true Triad movies, 2005’s “Election” and its sequel, “Election 2” (aka “Triad Election”). This set contains both those thrillers — so famous for their complexity, nuance, performances and violence that they are often called the “Godfather Saga of Hong Kong.” The third film in this set is 2004’s “Gong Wu” (“Triad Underworld”), which has nothing to do with To or his Triad series, but it makes a nice warm-up for the other two. Good stuff.