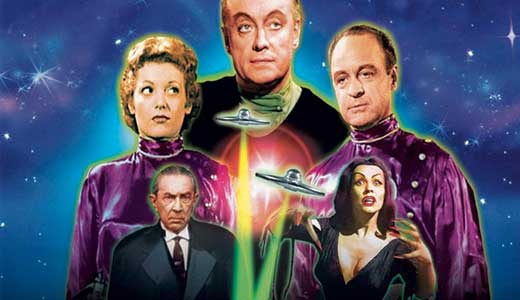 I SPIT ON YOUR GRAVE 2 PACK

The 1978 original starring Camille Keaton was the de facto rape-revenge flick for a generation. Keaton played a young woman seeking solitude, only to be brutally and repeatedly raped by four men, one of them with the intellect of a child. But it’s what happens next that you never forget … Sarah Butler stars in the 2010 remake, which improves on the original in subtle ways. It’s a more polished production, with the addition of a sheriff character, but delivers the same devastating impact. A welcome two-fer.

Surely by now no one has to tell you much about these perfect examples of the full spectrum of late-’50s schlock. “Plan 9” is Ed Wood Jr.’s stupidly entertaining ode to flying saucer flicks, as well as Bela Lugosi’s last film, while “Shop” is Roger Corman’s no-budget masterpiece about a skid row loser who finds fame, fortune and fertilizer in a talking, man-eating plant named Audrey 2. They’re now both available individually on Blu-ray. What more could you possibly want to know?

A welcome return by one of the funniest men who ever lived: Jonathan Winters. This truly weird, fully improvised performance-art piece about Jonathan’s dream to hang his paintings in a major gallery is just a pretext for the 78-year-old master of mischief to riff unfettered. And when the irrepressible Robin Williams chimes in, it only gets better! Now imagine what it’s like when Howie Mandel, Rob Reiner, Tim Conway, Jimmy Kimmel, Ryan Stiles, Jim Carrey and Robert Klein join in the melee! Recommended.

This ultra-violent medieval outing by action/sci-fi master Paul Verhoeven (“RoboCop,” “Total Recall,” “Starship Troopers”) wasn’t one of his big hits, but it’s one of our favorite blood-and-mud movies. Rutger Hauer stars as a 16th-century mercenary hired to visit havoc upon a neighboring kingdom, only to get stiffed on payday. Bad move. The great cast includes comely Jennifer Jason Leigh, Brion James and Susan Tyrrell — but be warned: This is very rough stuff, including gut-wrenching torture and a pair of violent rapes.

As regular readers know (support groups standing by), we’re not fond of remakes, especially when what’s being re-made is one of the best movies ever. But Kenny Wormald makes for an acceptable update to Kevin Bacon’s big city transplant who teaches a small town how to dance, despite the preachings of the Rev. Dennis Quaid. An upbeat and lively outing with non-stop (if just a little too polished) dance numbers. We suggest you watch both this and the Bacon original.

A terrific telling of George R.R. Martin’s massive myth of muscles and mi’ladies. In a fantasy land of dire wolves and dragons, Sean Bean fights for the honor of his king while courtly gentlemen and ladies manipulate the bloodshed, safe in their lavishly dreary towers. An extraordinary — and huge — cast is kept perfectly in play by taut direction and some of the best writing to ever grace the Great Cable Wasteland. And tits, don’t forget the tits, lots of great young tits. Recommended.

After “300” made so much money, everyone jumped on the sword-and-special-effects bandwagon, looking to churn out new franchises. This isn’t going to be remembered as that franchise, but it’s better than you’ve heard, if only because of actors like Mickey Rourke, Henry Cavill, John Hurt and Freida Pinto. They are all bound in the quest to possess the Epirus Bow, a mystical weapon with power over the gods’ army of Titans. Overblown forgettable fun.

We have friends who are major Adam Sandler fans: They think that whatever he does is pure genius. They were apparently who the studio had in mind when they green-lit this surprisingly kid-friendly comedy with Sandler playing both a successful ad exec and his obnoxious, overweight twin sister. Co-stars Katie Holmes as the woman of our dreams.

The best PG-13 romantic drama of modern times. Felicity Jones is breathtaking as the college-age Brit who falls in love with American Anton Yelchin. Their affair is everything you remember your first love to be: tender, passionate, all-consuming and life-changing — until she gets deported. Sound contrived and hokey? You betcha! But it’s still a great ride, and the best date-flick we’ve seen in a coon’s age.

This wonderful comedy, one of the very first “talkies,” features the perfectly named Bessie Love (whom we’ve always had a crush on) as the kid sister of Leila Hyams, a secretary who weds her wealthy boss, Conrad Nagel. The new bride demands that he move into her family’s crowded NYC apartment, which is where Love goes to work weedling money from the hapless lug. One of our favorite old-old flicks, back again in fine form.

THE SKIN I LIVE IN

Fans of Pedro Almodóvar have been salivating for this to be released on home video. Antonio Banderas plays a tormented plastic surgeon who tests his experimental synthetic super-skin on Elena Anaya, a volatile and mysterious woman who might be linked to the death of his wife. An artful tale of obsession, madness and revenge with lots and lots of nudity. Yaaayyy!

Larry the Cable Guy takes up the fairy wings from “The Rock,” star of the first “Tooth Fairy” flick, and heads out — pink tights and all — to recover 20 teeth in 20 days as punishment for telling a kid that there is no Tooth Fairy. To be honest, this was kinda painful to watch, but we weren’t the intended audience: The kids in the room thought it was a gas. Who are we to argue?

Finally, a real horror film for adults! Kate O’Rourke is a woman haunted by memories of her lost daughter amid a nightmare world of incest, abuse, madness, sexual perversion and gore. A grim, lowbrow supernatural splatter film, to be sure, but you can’t help but admire the filmmakers’ purity of vision and their unflinching commitment to the tale.