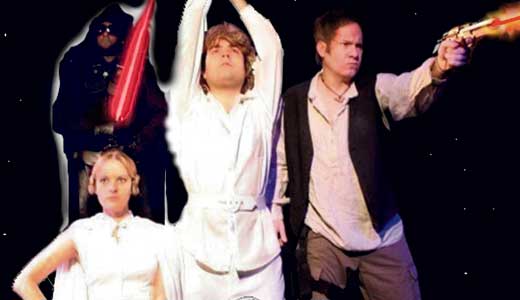 The often overlooked Alley Theater tackles thoughtful works but isn’t afraid to exploit the campiness of drama — perhaps to remind us that life doesn’t always have to be serious to be taken seriously.

“Star Wars: The Original Trilogy in 60 Minutes or Less” is the latest in their film/theater series, which has featured “Evil Dead: The Musical,” “Point Break Live” and “The Matrix Live.” Besides the clear wink and nod to geekdom, the “Star Wars” show offers a great platform on which to debut the Alley Theater’s brand new black-box theater space. The experience is perhaps a bit more intimate than one might expect from a story that has so much breadth, but it works well to remind you of the personal connection needed between performer and audience to pull off great comedy.

When I first heard about “Star Wars: The Original Trilogy in 60 Minutes or Less,” there was a 6-year-old “Star Wars” geek inside of me wondering if this was going to be a tribute to or a mockery of George Lucas’ masterpiece: a tribute to Spaghetti Westerns via the tale of an ancient intergalactic empire. Could they really take me from Tatooine to Endor in under an hour? Would we get to visit Dagobah and Hoth? Or would they be cooler-than-thou hipsters mocking me for even asking such things?

But of course, the most important question of all was: Will they do enough for the Jedi-obsessed fanboy who I know still lingers somewhere in my stunted psyche?

All nostalgia aside, the show is cheeky, hilarious and moves at warp speed. The talented cast of four (Scott Goodman, Valerie Hopkins, Kenn Parks and Tony Smith) navigate their way through the loose framework of Lucas’ story by utilizing their improvisational skills and the occasional Halloween costume to tell the story that is so familiar to millions. The show is chock-full of irony, sarcasm and nerdy nods. Playing Han Solo with the machismo of a star quarterback on a high school football team makes for good-natured ribbing toward a franchise that has clearly meant so much to so many.

Most impressive is the cast’s ability to jump in and out of characters seamlessly within a single scene. Oftentimes, broad productions with small casts end up being more distracting than they are impressive. That is certainly not the case here. I’m not sure if that’s a compliment to the cast or director Chris Petty, or both. Either way, the show’s flawless character-hopping is something to behold among all the improv and hi-jinx taking place on stage.

Truthfully, this is a show for everyone, not just those of us of the pariah persuasion. The jokes are probably deeper and richer the more familiar with the lore you are, but ultimately everyone knows the source material well enough to not just enjoy the show, but laugh your Jedi-lovin’ ass off.