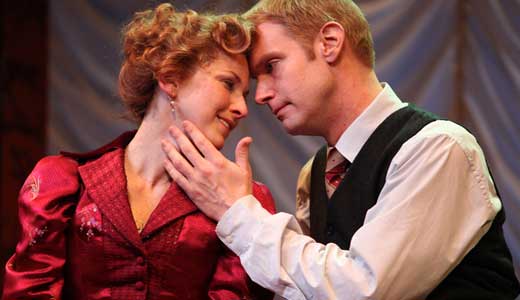 In this age of cleavage, miniskirts and booty shorts, ladies tend to leave little to the imagination. If those Victorian broads could have seen what was coming, they wouldn’t have lasted five seconds without fainting and, well, neither would the men, probably. Sarah Ruhl’s piece, “In the Next Room (or The Vibrator Play),” illustrates something that awkwardly fit in to this corseted, white-gloved time — a condition described as “hysteria” in women (and some men) and the way it was treated. Patients diagnosed with hysteria would receive an electric vibratory massage down there to induce a paroxysm and to hopefully relieve them of their symptoms.

We meet Dr. Givings (Grant Goodman), a physician who administers these treatments in his home operating theater. He and his wife, Catherine (Cora Vander Broek), just had a baby, for which they hire Elizabeth (Tyla Abercrumbie) as the wet nurse. Dr. Givings’ patients include Sabrina Daldry (Cassandra Bissell) and Leo Irving (Matthew Brumlow), who constantly bump into Catherine and one another despite Dr. Givings’ efforts to keep them all separate, especially from his wife, as not to “distract” them from their therapy. Catherine, her husband’s patients, his assistant Annie (Jenny McKnight) and the doctor alike are all affected one way or another by this little machine, in some rather surprising ways, and end up learning quite a bit about one another and themselves.

Goodman marvelously portrays a kindhearted, impossibly practical doctor who genuinely cares for his patients but has a bit of a one-track mind that hinders his personal relationships. It isn’t until he feels threatened that he begins to reveal his deepest emotions — a transition Goodman reveals beautifully. Making for an excellent contrast to her husband’s excessive logic, Catherine is restless, excitable and clearly struggling with finding her place. Everyone else seems to constantly be in the next room without her.

As the anxious and gloomy Mrs. Daldry, Bissell is lovable right from the start, being both a humorous and heartbreaking character because of her aching emotional honesty onstage. I heard sniffling all around me (OK, and my own) two different times during Abercrumbie’s stage time — once during a speech, and another time when she wasn’t saying anything at all, as her facial expressions spoke for her. Brumlow blows the stage up with life and color just when the play needs it, as does Jonathan Smoots as Mr. Daldry, with his delivery and high energy. Finally, as the doctor’s assistant, McKnight is a comforting presence right through to the end when we welcome her own carefully hidden secret.

The set, which displays the Givings’ drawing room and the doctor’s operating theater, is curvy and elegant and dressed with carefully selected and well-used props. There is almost always action taking place simultaneously in both rooms, and though I worried I missed something looking back and forth, the staging was effective.

With the spot-on aesthetic elements in place, the strong cast under the direction of Laura Gordon fantastically realizes Ruhl’s exceptional script. Witty, well paced and full of hysterical (no pun intended) double-entendres, the play is a refreshing take on 19th century literature. This play shines in its subtlety and symbolism — words like sex and vagina are never uttered, and hardly any skin is shown. Themes of nature versus technology, light and dark, and the quest for sexual identity prevail, allowing us to laugh at the characters’ innocence, empathize with their struggles and leave feeling fulfilled.