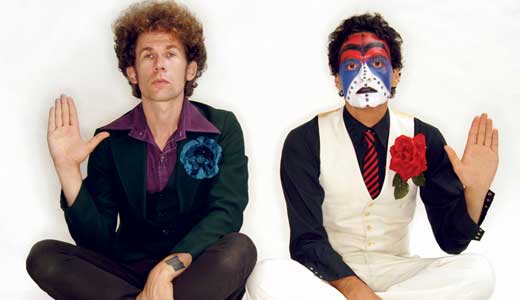 Phantom Family Halo founder Dominic Cipolla decided to move from Louisville to Brooklyn. “About a year before I moved, I set a date, told everyone in the band that I was going and that I would love for them all to join me. But not everyone has the same goals and interests. I just needed a jolt of energy in my life that I knew I needed to find elsewhere.”

When I Fall Out is the fourth full-length album for the band and the first since the tragic death of Cipolla’s close friend Tony Bailey, a drummer widely admired for his skill and prolificness. The album, out this week, is the first of two planned by the band for release this year.

“These songs were all written over the course of a year or so, after his passing. Within days of it happening, it was my therapy of sorts. I was doing the only thing I knew that would help me with all the confusion and anxiety of such a drastic turn in life, helping to make it the smallest bit easier to comprehend for myself,” says Cipolla. “It is certainly influenced by dealing with his loss, but it is also influenced by other people I have known who have gotten pretty lost along the way. It’s also, I guess, about an overall feeling that the fun at the party is over and has taken a very dark turn — people wanting to live in that synthetic place so badly that they never come back.

“‘When I Fall Out,’ the song, is about that moment when they have finally achieved that goal. It’s sort of a journey through the high and low points of someone’s quest for that high that they’re just not getting from the regular human experience. Even when they have so many around who just want to love them and enjoy them, they just end up leaving them behind.”

Moving away helped Cipolla move forward, both musically and in general. “I love New York so very much. I love all aspects of the city. Its history is so endlessly entertaining to me, the dirtiest subway rat to the prettiest flower in the park … The possibilities to explore are endless here. I am always finding something new and thinking how glad I am for leaving the house that day.”

The second album, Hard Apple Moon, “is full of all the positive energy and excitement that comes along with moving to such an interesting and wonderful place,” he says. The band wanted to keep the two sets of songs separate. “The second set is very uptempo and more about my surroundings and being re-energized for a future unknown. The title ‘Hard Apple Moon’ is really a loose term for something that I can only describe as being a life-saver. I started writing the second set the week I moved to New York City … The songs from each set just naturally didn’t seem right together.”

Though Cipolla also plays guitar, drums are his first love, leading him to often provide multiple parts on recordings. “When I get a general idea in my head, it is just easier for me to get it going … I always hear very specific beats and fills that I would rather do myself. Then, of course, with writing the songs, my guitar playing and vocals are in the process as well. So in the end, I just end up piecing the majority of the tune together. Then others may add to it, as well.”

Highly informed by ’60s and ’70s rock — glam, psych and heavy rock, especially — Cipolla defines himself as “way out of the loop” with music. “I’m pretty confused about what is going on in today’s world. I’m still finding music from 40 years ago that compels my ears and mind … I do think that certain ears seek music like that out and find it and benefit from it.”

Music has proven its healing powers to him. When he plays the songs from his new, dark album live, “I am able to step out of the original thought process and just hear it as a song with melodies and changes and dynamics. I enjoy playing them very much."