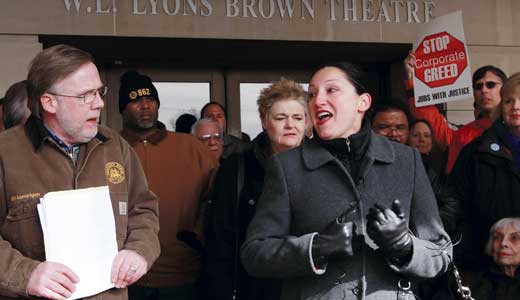 The Kentucky Opera is set to put on a performance of “The Merry Widow” at the Brown Theatre Friday night, but members of the Louisville Orchestra are anything but merry.

After nine months of failed contract negotiations between the musicians’ union and the Louisville Orchestra, the Kentucky Opera chose to use around 35 replacement musicians to supplement this weekend’s performance.

Friday is also the deadline orchestra management set for the union to agree to their binding arbitration offer. If there is no agreement, they will go forward in looking to hire replacements for future performances.

These actions led to a rally of nearly 70 people in front of the Brown Theatre on Monday morning, with leaders from many local unions pledging solidarity with the musicians.

Along with decrying the tactics of the orchestra and opera management, the union leaders stated their intentions to put their money where their mouths are: If progress is not made quickly on a resolution, they will tell their thousands of members to cease contributing money to the Fund for the Arts, which provides a large amount of funding for both organizations.

With only a few days before showtime on Friday, tensions are high, and not many are hopeful.

At Monday’s rally, Bill Londrigan, the president of the Kentucky AFL-CIO, called the hiring of replacement musicians an “unprecedented and reprehensible action” and described the Louisville Orchestra’s arbitration offer as a “stink bomb” and “another publicity ploy designed to make musicians look like the bad guys.”

The union leaders pointed to a possible solution to the impasse: a report by Henry Fogel — a nationally respected figure in the orchestra community — made at the request of the Fund for the Arts. In the report, Fogel detailed recommendations to solve the dilemma, including rethinking the orchestra’s fundraising models, leadership and marketing.

But the main suggestion was for Mayor Greg Fischer and the Fund for the Arts to get heavily involved — again.

“I believe that the Fund for the Arts, ideally in cooperation with the Mayor, should convene a blue ribbon committee to examine all aspects of the situation regarding the Orchestra, and should be empowered to make recommendations on a future course of action,” Fogel wrote in the report.

Fogel calls for an experienced professional from the field to facilitate the committee’s deliberations, which would be organized in the next few weeks and have its recommendations finalized by early April. But if action isn’t taken soon, Louisville’s union leaders made it clear that they will inform their membership to reconsider making donations to the Fund for the Arts.

Following the rally, a throng of about 30 protestors walked to Mayor Fischer’s office to present the Fogel Report to him. The mayor was out of town, and his spokesman, Chris Poynter, didn’t sound optimistic about the report changing anything.

“We’ve tried to help in the past, and it didn’t work, so I’m not sure why this would be any different,” Poynter said. “But he will read the memo and take it under advisement.”

The group then walked to the Fund for the Arts office, where CEO Barbara Sexton Smith agreed to an impromptu meeting in a crowded conference room.

Though Smith said she has read the report, she has not yet presented it to the board. She agreed that Fogel made good recommendations and said she would share it with the board as quickly as possible, but couldn’t promise further action.

“I think she gave good answers, but actions speak louder than words,” says Kimberly Tichenor, a violinist and chairwoman of the musicians’ negotiating committee. “We’re going to have to see what comes of this. We need to see some things happening quickly, or there’s not going to be a next year.”

Orchestra violinist Tamara Meinecke repeats a common refrain among her colleagues: The Kentucky Opera’s use of replacement musicians — including high school and college students — is simply worsening the dispute.

“I’m incensed that someone would put children in this situation,” Meinecke says. “Crushed at the lack of respect by the Kentucky Opera toward us. I have a master’s degree from Yale, devoted my life to it, went into debt, 20 years of professional experience, my parents sold a piece of property to buy me a violin, and I could be replaced by high school kids. Crushed.”

Steve Taylor, a violinist with the Louisville Orchestra for 32 years, bears no animosity toward the replacement musicians, but he feels management is using them.

“I don’t think they understand what’s going on here,” Taylor says. “They saw an opportunity to play, and they’re only looking at it from that point of view. They’re not seeing the big picture.”

Later that night, a group of eight orchestra players stood in the cold outside the Brown, occasionally peaking in the front window to watch their replacements rehearsing for Friday’s show. As they had on previous nights, they tried to pass out fliers to their replacements informing them of what was happening.

“The only reason that we are out here tonight is to inform them, and in no way to harass them,” says Don Gottlieb, a piccoloist in the orchestra for 34 years. “We all love to make music.”

Kimberly Tichenor sees the Kentucky Opera as furthering the Louisville Orchestra’s cause of breaking their union, and not necessarily by accident, as the two organizations share much of the same staff.

“The Louisville Orchestra now has the opera carrying out their daydream, trying to test to see if they can get replacements for us,” she says. “So I think that David Roth (CEO of the Kentucky Opera) is absolutely playing Russian roulette with his opera company here to try to carry out the Louisville Orchestra’s agenda.”

On Monday afternoon, the Kentucky Opera announced that their conductor for “The Merry Widow,” Joe Mechavich, was stepping down from the production. Earlier that day, the conductor apparently received word from the Milwaukee Symphony Orchestra that they would not be able to play for him in an upcoming performance if he conducted for a replacement orchestra.

Anticipating such a backlash, Roth tells LEO he brought in an assistant conductor to work alongside Mechavich during rehearsals. That assistant — whose identity Roth is choosing to keep secret for now — will take over as lead conductor for “The Merry Widow.”

“We’re just trying to be cautious where some of these individuals are concerned — like our assistant conductor — who have been threatened by certain leadership of the union,” Roth says.

Roth says he wishes he didn’t have to hire replacements, but was left no choice due to the stubbornness of the musicians and management of the Louisville Orchestra in coming to an agreement. And despite the turn of events on Monday, he does not regret his decision.

“Would I do it differently? No. Because in the end, it’s not about me, or about whatever jobs we’re looking at. It’s about serving the mission, and I have to do what I believe is best to serve the mission of our performing arts organization that serves our patrons and serves our community,” he says. “Perhaps that is what the Louisville Orchestra has lost sight of.”

As the orchestra members gathered outside the Brown Monday night, they received an impromptu visit from Roth. He told them he had spoken to Rob Birman, Louisville Orchestra CEO, and believed he would be open to considering a counter offer from the musicians.

Birman — who complains that he still hasn’t been given a copy of the Fogel Report — told LEO on Monday that though he didn’t “invite” a counter proposal, he would be open to one if it provided a sustainable model for their budget.

But considering just how wide the chasm has been over the past year between the two parties over what constitutes a “sustainable budget,” optimism might have run out its course.