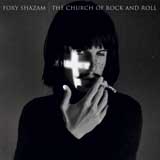 Twenty years after the IRS label signed Over The Rhine, who thrive to this day, the resurrected imprint has picked up another Cincinnati band, one that couldn’t be more different from that clique, though both are fronted by outsized classic diva personalities. Foxy’s Eric Nally is one of the great rocker personas of today: The guy is just fun to listen to. Even if his band’s brand of Americanized Queen isn’t for you, The Church of Rock and Roll is difficult not to enjoy just for the bombast and sincerity in going there. “(It’s) Too Late Baby” is epic rock; if its individual parts remind you of a who’s-who (ahem) of ’70s rock bands, that’s fine. You’re too involved in singing along, playing air piano and guitar, to connect the dots. An eyebrow is raised at the fetishistic single “I Like It,” a Zeppelin romp about a woman’s ample posterior that renews 40-year-old debates about “Brown Sugar,” but if you take it for the fun in which it was intended, you can’t help but “Like It,” too.