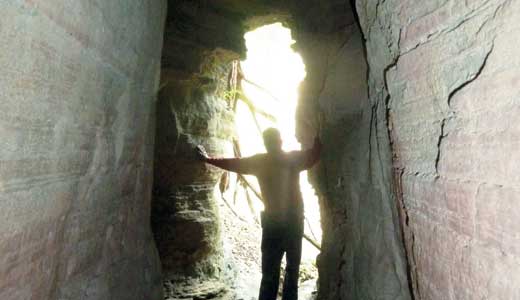 But LG&E has since hit a snag, in large part due to local activists pointing out the presence of a cave at the proposed site.

At a public meeting held last October in Bedford, about 4 miles away from the proposed landfill, the Kentucky Division of Waste Management — which must approve the permit — provided information and fielded questions from nearly 100 residents about LG&E’s proposal.

Many spoke out against the landfill, citing health concerns, the devaluation of their property, and the troubles of those in Louisville who live next door to LG&E’s landfill on Cane Run Road, where clouds of fly ash cover homes. Several citizens also brought up the presence of at least one cave on the property.

In response, Mike Brandenburg, a geologist with the Division of Waste Management, told residents he had toured the area with LG&E and did not find any caves.

Following that meeting, however, the Division of Waste Management re-examined the property and discovered one of the caves in question, according to a document obtained by LEO Weekly. As a result, the agency issued a notice of deficiency on LG&E’s permit, meaning the company cannot move forward with the plan as-is.

“During the public meeting on October 6, 2011, DWM was informed about the presence of a cave in the proposed disposal fill area,” Ron Gruzesky, manager of the agency’s Solid Waste Branch, wrote in a Nov. 30 letter to LG&E. “The cave’s location was confirmed by DWM personnel during a site visit on November 15, 2011. A review of historic files produced a November 1979 hydrogeologic investigation document identifying the cave as Wentworth Cave.

“Pursuant to the Kentucky Cave Protection Act, it is unlawful to remove, kill, harm, or otherwise disturb any naturally occurring organism found within any cave. In accordance with 401 KAR 45:030 Sections 3 and 4, DWM is unable to issue a permit inconsistent with state law.”

Gruzesky further notified LG&E that in order for their permit to go forward, they must figure out a way to comply with the state law, either by relocating the planned landfill, or by proving the cave in question is, in fact, not a cave.

When asked about the current status of their permit, LG&E spokesman Chip Keeling initially told LEO Weekly there had been no problems and they were awaiting a response.

“We’re just waiting on the permit now, we haven’t had any issues,” Keeling said. “I think there was some question at one time about whether there were caves at the location. And the fact is there are not. It’s not really a story.”

But the Division of Waste Management confirms they did find a cave and are awaiting a response from LG&E.

“From our standpoint, the review has stopped, and the ball is in their court.”

Following a story about this on LEO’s news blog last week, LG&E’s Keeling followed up with more information. He confirmed that LG&E has received the notice of deficiency, but the company disputes the agency’s findings based on a review of the land from a consultant that they hired.

“Our consultant’s report states that none of the features fall within the regulation cited in the (notice of deficiency),” Keeling wrote in an email. “In addition, the biological assessment did not find any cave-dependant life forms that would be disturbed by our proposed landfill.”

LG&E maintains that the cavernous underground rock structure (that looks an awful lot like a cave) is not actually a cave. Even if it was, Keeling says the Kentucky Cave Protection Act does not prohibit “eliminating a cave” as long as it’s permitted by the land owner, “which in this case is LG&E.”

Keeling says LG&E will submit their formal response any day now, and they “do not expect any impact on our plans.”

The Kentucky Division of Waste Management doesn’t see it that way.

“Oh, it’s a pretty serious impediment,” Gruzesky says of the cave. “I think the big question is, is this something they can overcome? And it’s not something that we deal with on a routine basis, so I can’t point to any permitting history, or any instances in our background and say, ‘Well this is what we’ve done previously.’ Because we’re on new ground here.”

The presence of a cave at the proposed site has been a godsend to locals in Trimble County hoping to prevent the landfill from opening in their neighborhood.

Local farmer Kelley Leach, whose 95-year-old grandmother lives on a farm across the street from where the landfill would go, has been organizing his neighbors to oppose LG&E’s permit since he found out about it last year.

On Jan. 20, Leach traveled to Louisville to attend a meeting organized by the Sierra Club and local activist Kathy Little at the Southwest Government Center, where residents near the Cane Run and Millcreek power plants spoke about organizing to protect their communities from pollution. He’s spoken with Cane Run residents like Little and doesn’t want to see the same ash clouds descending on his property.

“If they build that coal ash containment, the neighborhood directly affected by it — our land, water, everything about our lives — will be changed,” Leach says.

“Our land values won’t just be decreased, they’ll be destroyed. Because there’s not anybody in their right mind who is going to want to come down and buy any country farm land next to a coal ash containment industrial waste site.”

Other residents in Trimble are concerned about the health of children in the area, as the only licensed day care center in the community is located directly across the street from where the landfill would go. In response to those concerns, LG&E scientist Paul Puckett told flabbergasted Trimble residents last October that he would have no problem raising his kids next to such a landfill, as coal ash — containing mercury, arsenic and other heavy metals — is perfectly safe.

When discussing the possibility of LG&E moving their mountains of coal ash at Cane Run to another site, Sierra Club organizer Tom Pearce told the crowd they must unite to make sure it’s not simply dumped in another community — like Leach’s.

“They could very well build a new containment out in Trimble County and say, ‘Well, we’ll take the coal ash out there,’” Pearce says. “The bottom line is, those options aren’t OK. We’re all going to stand up for each other.”

LG&E has stated their intention to convert the Cane Run plant to natural gas by 2016, and Leach hopes they will do the same at their Trimble plant, making their new coal ash landfill unnecessary.

“We don’t have any choice but to try to get them to try better forms of energy,” Leach says. “That’s the only way that we as a society are going to get past this, when there’s some kind of conversion that eliminates this dirty coal.”