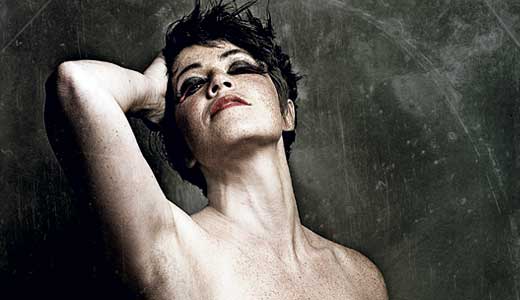 For this special evening of Witch House music, the artist known last month as Crash Symbols appears live in the skinny jeans capital of Germantown to lull the crowd into a blissed-out haze of warm, ambient, electronic pop-ish sounds. I’m not saying it’ll sound better if you’re loaded, but it probably will … though it might sound even better on headphones, lying on one’s back on a comfy sofa somewhere warm, yet it will still be a nice soundtrack to drinking PBRs. Locals Noise New York will jam some righteous energy at your skullz to get you moving, with DJ JP Source adding some luscious beats to help you pretend it’s Ibiza in June, not Louisville in February. —Peter Berkowitz

‘In the Mix’ events

“What is cultural authenticity, and who decides what is truly a significant representation of a culture?” With that question, Aldy Milliken, KMAC’s new director, leads us “Into the Mix.” The exhibition featuring 10 Caribbean artists is on display from Feb. 3-April 14. To get the party started, Puerto Rican artist Sofia Maldonado is tagging KMAC’s first floor windows on Feb. 1-3, arts/cultural writer Nicholas Laughlin will be texting and blogging daily, and several of the artists will be creating collaborative pieces. Also, Cuban painter — and Louisville resident — Carlos Gamez de Francisco will begin as KMAC’s latest artist-in-residence. The opening reception is during the Feb. 3 First Friday Trolley Hop. A talk on “Contemporary Art from a Caribbean Perspective” is Saturday, Feb. 4, at 4 p.m. at U of L’s Chao Theatre. —Jo Anne Triplett

The Louisville Ballet likes to stretch (pun intended) its repertoire with small performances of classical and contemporary dances. Their new in-studio program, called “Studio Connections,” is a variant of the annual Choreographers’ Showcase and has the full company dancing in your lap. OK, not that close, but close enough for you to see what long hours of talent, training and creativity can produce. It doesn’t get much better than this for balletomanes, unless you’ve got an after-production backstage pass. Maybe. Pieces include original works from Louisville Ballet Company members Amanda Diehl, Ben Needham-Wood and Carrie Patterson, as well as dances from “Le Corsaire,” “Raymonda” and the traditional Ukrainian solo production “Gopak.” Space is limited; purchasing tickets in advance is recommended. —Jo Anne Triplett

‘Blues for an Alabama Sky’

The African-American Theatre Program at U of L has been on a Pearl Cleage kick lately. Cleage, who spoke at the university in December, wrote “A Song for Coretta” and “Mad at Miles: A Black Woman’s Guide to Truth,” both produced by the AATP in the last two years. Why does Pearl keep popping up? “Cleage has an amazing ability to get inside your head with her insights to human nature,” says director Nefertiti Burton. “She delivers deeper meanings and powerful messages in the ordinary interaction between characters.” The current offering, “Blues for an Alabama Sky,” balances the jazzy sights and sounds of the Harlem Renaissance with issues of the time that may sound all too familiar to a modern audience, like unemployment, race relations, and gay and reproductive rights. —Jane Mattingly

St. Francis High School Imagine Art Auction veterans will be pleasantly surprised with the event’s setup this year: Now they’ve got options. In addition to the traditional dinner fare, participants will have the choice to arrive at a later time for a dessert reception with a full bar, a coffee shop and live entertainment. But serious art collectors and talent scouts beware, because dinner guests will have the first viewing of the art and bidding privileges on trips to Costa Rica and Puerto Rico, use of a Porsche for a weekend, and a portrait by renowned painter Gaela Erwin. This night of fun and culture will be grounded by Erwin’s painting, which depicts St. Francis sophomore Kinsey Morrison, a survivor of three life-threatening illnesses who is currently in training for a marathon. All proceeds go to the New American and Talented Minority Youth scholarship programs. —Simon Isham

If you’re out and about on the Trolley Hop this Friday, be sure to add Bearno’s By The Bridge to your itinerary. Curators Andy and Kelly Cook have assembled an art show featuring more than 30 local artists at Bearno’s, including Erin Fitzgerald, Genna S. Yussman, Jada Lynn, Scott Hile, Richard Francis and many more. Along with all the art, there will be an open mic, spoken word by Christina Howard, Kenn Parks and Ron Whitehead, and live music by Son of the Widow. Also, upstairs, you can catch a magic show by Francis Menotti. Pizza, art, music and magic — sounds like a great combo to me. —Sara Havens

Locals Nerves Junior and Dr. Vitamin surround touring bands Vinyl Thief (from Nashville) and The Black Cadillacs (from Knoxville). True to what their name suggests, The Black Cads are a sturdy, vintage throwback of a band that wouldn’t be out of place in the 1960s. If you like bands like The Black Keys (a band that would sit in the bin next to The Black Cadillacs in a record store, if those still existed), and who doesn’t, then this bag o’ rock ’n’ soul might be for you. I mean, c’mon, they have a song called “Something to Shake,” for goodness’ sake. While the popular, more overtly artsy Nerves Junior may not be the most obvious choice to pair them with, it should be fun to see the battle between the brains and the butts. —Peter Berkowitz

The interestingly named band from the Ozarks just might be the next Wilco (or not). (They’re named after a state park, BTW.) Their winning blend of Americana and indie rock has been getting more and more attention as they work toward perfecting it — most notably on the Ozarks episode of Anthony Bourdain’s Travel Channel show “No Reservations.” The group has spread their wings as they’ve traveled (their leader now lives in California), expanding from rural rugrats to grown-ass American men as likely to shop at the Gap as Dick’s Sporting Goods. Their third album, Death of a Deacade, was released a year ago to positive response, including a popular performance here at Waterfront Wednesday. See them now before they get too big (hey, who thought the Decemberists would become stars charging $30 for tickets?) —Peter Berkowitz

Five exhibits in one

At the corner of Third and Broadway, a building stands with welcoming arches, housing St. Francis High School, known for art and academic excellence and Land of Tomorrow, a space dedicated to the creation, display and promotion of art. “A lot of the pieces are constructed onsite and engage directly with the architecture of the space in a relaxed, playful manner,” explains director Dima Strakovsky. The newest event brings five exhibits together, all with an organized chaos that merges sense and delusion. Paintings from Amanda Church, like “Hollywoodland,” infuse West Coast tendencies, while Taylor Baldwin’s “Prodrome” uses sculpture to deal with imminent catastrophe. Installation artist Lisa Walcott emphasizes fleeting moments with “My Pleasure,” as Jacob Isenhour and Willard Tucker collaborate to bring “A Colder Friday,” a site specific work, including elements trapped in ice. —Allison Ray

At the age of 33, Mike Birbiglia has accomplished more than most comedians do in a lifetime — including getting stand-up taken seriously as “theater,” a more-respected format that allows for more relaxed storytelling, the possibility of awards, and, oh yeah, higher ticket prices. Indeed, this performance is titled “My Boyfriend’s Girlfriend,” and even comes with a director. The press release states: “On this painfully honest journey, comedian and author Mike Birbiglia struggles to find logic in human relationships.” Sounds like stand-up to me. Don’t get me wrong, I came here to praise Birbigs — a regular contributor on NPR’s “This American Life” — I just want you to know this is going to be a guy saying funny things, not some “Tony & Tina” night at the theater. —Peter Berkowitz

Valentine’s Day is coming, and as we all well know, it’s the high holiday of romantics and chumps alike. Roses and chocolates and fancy dinners — first kisses, stolen glances and love at first sight — it all seems part of the mythos and foolishness. But is there any better way to spend the holiday than with a bevy of buxom, half-naked women singing and performing acts of human profundity? Well, that’s exactly what Va Va Vixens have in mind for their annual “Va Va Valentine” performance at Headliners this month. In the season of romance, there is hardly anything as romantic as a memory that harkens back to the era of burlesque (unless it stars Cher and Christina Aguilera — then it’s just horrifying). So grab your loved one and come out, to get lost in the whim of a bygone time and the gentle beauty of what these shows reveal. —Brent Owen

U of L’s Comstock Hall, School of Music

Racial identity placed in the context of evolving socioeconomic stratification. This isn’t an easy issue to navigate, folks. So when a Pulitzer Prize winner comes to town to discuss the matter, we should listen. Washington Post columnist, editor and author Eugene Robinson will speak Tuesday on “Disintegration: The Splintering of Black America,” the title of his most recent book. Robinson’s speech is this year’s U of L Phi Beta Kappa lecture. The honor society promotes education in the liberal arts and sciences. An op-ed columnist since 2005, Robinson won the 2009 Pulitzer for his writing on the 2008 election of Barack Obama. The talk is free, open to the public and includes a post-speech reception. —Anne Marshall