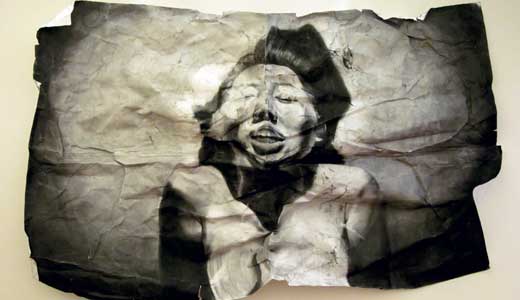 U of L Chao Auditorium at Ekstrom Library

The Institute for Intercultural Communication’s aptly named film series features work from two legendary, international directors and one who’s been somewhat forgotten outside Latin America. Germany is the first stop on this three-continent tour, with Fritz Lang’s 1931 thriller “M.” The next leg takes us to Akira Kurosawa’s Japan and a film often cited as one of the best ever: 1954’s “Seven Samurai.” The series dips 11,000 miles southeast to Argentina on day three, with 1985’s “The Official Story.” Although it hit just one screen in the U.S., this directorial debut from 39-year-old Luis Puenzo managed to win the Academy Award for Best Foreign Film that year. This political family drama follows a wealthy Buenos Aires couple who suspect their daughter’s biological parents were victims of the state’s Dirty War, which targeted anyone remotely left-leaning. —J. Christian Walsh

The Gallery at Whiskey Row Lofts

The Kentucky School of Art excels at bringing accomplished art talent to Louisville. Their latest speaker is Karla Wozniak. A graduate of the Rhode Island School of Design and Yale School of Art, Wozniak is an abstract artist. She’ll be discussing the way she and other artists alter the American landscape. “I make paintings about how the American landscape looks today,” explains Wozniak in her artist statement. “These paintings are at once fabrications, conflations and literal depictions, records of the places I’ve traveled to and through. Of equal importance is what isn’t depicted — disappearing vernacular and natural landscapes. Although my work often depicts standardized and mundane spaces, it has a quirky, handmade quality, and thus highlights localism and an individual’s unique relationship to landscape.” —Jo Anne Triplett

“Fire & Ice” — sounds salacious enough to be a Valentine’s Day gift. In case you missed out, the Louisville Artists Syndicate has the event for you. Let’s start with the fire. Fire spinners/Poi troupe Art After Dark will perform three times during the evening. There will also be a laser art demonstration at 8 p.m. Then there’s the ice, with five ice sculptors carving frosty creations. An exhibition featuring art in the theme of fire and ice, of course, will be on display. The Busted Soles, playing a combination of bluegrass, rock and country, is the musical entertainment. Drinks are included in the cover charge, plus there will be food trucks in the parking lot. —Jo Anne Triplett

It may be Douglas and Alexandre Lora’s first visit to Louisville, but it can’t be said of them (nor their friend Dudu Maia) that they’re not well-traveled. Maia and the Brothers Lora are true ambassadors for Brazilian music; they comprise one-half of the band chosen to represent their country’s rich cultural heritage at the 2016 Olympic Committee meeting in Copenhagen. They play traditional reggae and forró, as well as a Portuguese-African-Italian musical hybrid called choro, which has been described by many as a “sweet lament.” For this performance in particular, always-jazzy Douglas Lora will be playing a seven-string guitar in trio with his brother on percussion and Maia on a 10-string mandolin. Get ready to samba. —Simon Isham

It’s time to show some love to the Speed: In October, the museum begins a three-year renovation during which it will remain closed, so if you’ve never visited, now’s the time to go. Even if you have been, this Art After Dark event, titled “redgreenblue,” will make you picture the museum in a whole different light. Local band Sapat will perform among medieval tapestries, and the English Renaissance Room will be transformed into a 3-D funhouse. The Louisville Improvisors have teamed up with the band Squeeze-bot to present “The Buddy Glim Show” for the first time since 2010. There’s also an art showing called “Rush and Roulette,” which promises to be “an execution of the Second Dimension”… no, I’m not quite sure what that means, either, but color me intrigued. Thanks to sponsors Brown-Forman and Liquor Barn, patrons can enjoy food samplings, specialty cocktail tastings and a cash bar. —Simon Isham

The Canadian Invasion has arrived. Or maybe it was already under way, just biding its time and choosing to manifest itself in big-ticket artists like Drake, Celine Dion and Justin Bieber. On Friday, IU Southeast will show its Maple Leaf Pride with this all-ladies lineup: acoustic pop duo Dala and country/folk trio The Good Lovelies. You might recognize Dala from a 2010 PBS special called “Girls From the North Country” on which they sang classics by fellow Canadians Gordon Lightfoot, Neil Young and Joni Mitchell. As for the Lovelies, though they may have only emerged in 2006, they have already released four studio albums and distinguished themselves at 2010’s JUNO awards. Now if only a few more like them would venture down from the True North; both groups are catchy as hell. —Simon Isham

‘The Roast of Abraham Lincoln’

First they roasted Jesus Christ, the savior of all mankind, in front of a sold-out crowd. But this time, the roastee might be even more controversial than the last — the savior of The Union. In honor of President’s Day, the Young, Dumb and Full of Comedy crew is taking on Honest Abe with “The Roast of Abraham Lincoln.” Hosted once again by Will Hardesty, the dais will be comprised of Mike Chandler, Brad Lanning and many other local comedians who have graced TYDFC stage before. Will they touch on the taboo? One can certainly hope. The material is ripe — an ugly wife, a string of dead children, racial tension, assassination, and rumors of homosexuality … this roast is guaranteed to memorialize our 16th president in a way that few have ever been memorialized before. —Brent Owen

U of L Chao Auditorium at Ekstrom Library

In case you’ve forgotten the basic principles of our three branches of government, here’s a snippet from a catchy “Schoolhouse Rock” cartoon comparing the separation of powers to a three-ring circus: Well, everybody’s act is part of the show, and no one’s job is more important.? The audience is kinda like the country you know,? keeping an eye on their performance.

A panel of experts will offer a slightly more nuanced explanation of our country’s checks-and-balances system of government during an upcoming symposium entitled “Separation of Powers: The Structural Heart of the Constitution.” Local political science professors and attorneys will address topics including the president’s foreign policy powers, whether Congress has strayed from the Founding Fathers’ vision, and the Supreme Court’s intervention (or lack thereof) on issues pertaining to the previously mentioned branches. —Sarah Kelley

With an open bar comes great responsibility. Or not — if City Scoot is around. Pandora Productions’ annual benefit party, “Masquerade,” is celebrating all things Mardi Gras Saturday night at the Mellwood Art Center — complete with said open bar, beads, masks and lots more. There will also be a silent auction featuring ceramic Mardi Gras-inspired masks made by local artists, as well as sweet items like airplane tickets, a Steepleton pool table, jewelry and spa packages, just to name a few. With sponsors like Four Roses, Absolut and Schlafly Beer, and entertainment by Robbie Bartlett, it’s gonna be a delicious time gettin’ down for a good cause. Don a mask and be someone different for the night — Tom Cruise did it. —Sara Havens

There is a certain poetry in not charging people to watch films like “Capitalism: A Love Story” and “Inside Job,” the searing, Matt Damon-narrated investigation of the ’08 financial crisis that created our need for no-cost entertainment in the first place. The New Albanian Brewing Co.’s Pizzeria and Public House is trying to help with that, offering free movie nights on the first and third Monday of each month. The mostly economic, environmental and health-care related documentaries are presented by Hoosiers for a Commonsense Health Plan. Next up is “The Last Mountain,” producer Sarah Bingham’s stirring film on mountaintop removal. Future showings include Michael Moore’s “Sicko,” “Gasland” and “YERT,” an eco-doc by Ben and Julie Evans of Louisville. There are still some slots to fill, so check the NABC website for listings. —J. Christian Walsh

Yes, Silas House is becoming a cottage industry. Prime example: The author’s next signing for Carmichael’s had to be moved to a bigger space (but do I really need to ask you to drop by Carmichael’s soon anyway, so as to serendipitously look through the books you would’ve noticed while waiting in the signing line?). Another example: He’s much sought after as a collaborator. Monday evening at the Clifton Center, he’ll be reading from “Same Sun Here” — a young-adult novel written with American Book Award-winner Neela Vaswani. This is an epistolary work where the story’s conveyed through the correspondence between an Indian immigrant in NYC and a coal miner’s son in Kentucky. The event’s free, and Carmichael’s will bring copies for sale. —T.E. Lyons

Ming Ying Hong knows how to pack a punch. By restraining her color palette and concentrating on texture and composition, she succeeds in making the surface of her works on paper something you end up peering into like trying to make out an object in the fog. Then it hits you — something ambiguous and discomforting, something psychological, surfacing as if from the bottom of a well. Her figurative specters, mostly self-portraits, are busy dissolving and emerging, the torque of their outlines shifting like the rooms in a bad dream. Born in Los Angeles, Hong is a recent graduate of the University of Kentucky with a BFA in painting and drawing. Her works on paper feature her considerable technical execution and a knack for making something compelling by confusing it — something beautiful that is simultaneously ugly, something usual that looks strange. —Chelsea Gifford