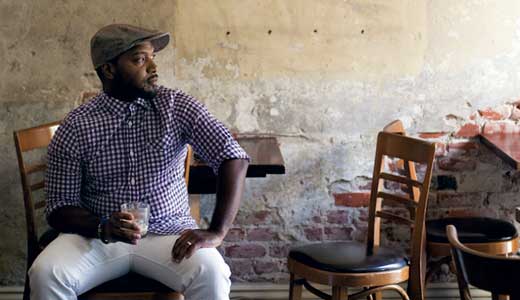 Bryant Terry @ U of L

The “Conditions of My Parole Tour” is the band’s first tour this side of the Mississippi, and Louisville is only the fifth stop. They aren’t playing any arenas: Whereas leader Maynard James Keenan’s other band Tool enjoyed great success in such a setting, Puscifer has a decidedly more artsy feel that blends better into the formal ambiance of a music hall than into the sweaty atmosphere of a stadium. This is probably because it’s not just a music collective — it’s a satirical performance piece that takes some of its meaning from being viewed. Soulful songstress Carina Round opens the show with her own music, then turns right around and joins the band. —Simon Isham

Just the fact that nuclear weapons exist is terrifying, and it’s even scarier that humans are able to come up with something like that. Inspired by an essay by Nobel Prize-winning American scientist Richard Feynman, U of L theater arts professor Russell Vandenbroucke’s piece, “Atomic Bombers,” takes us inside the Manhattan Project, depicting the team of international physicists responsible for creating the atomic bomb. An earlier, shorter version of Vandenbroucke’s play was broadcast on public radio on the 50th anniversary of the bombing of Hiroshima, as well as produced onstage. “It is a funny play about a very serious subject,” Vandenbroucke says. “This was the greatest gathering of scientific geniuses at one time and place for a single purpose. Only later did they realize the full extent of the horrible devastation that resulted.” —Jane Mattingly

Food justice activist Bryant Terry believes healthy food should be a basic human right for all communities. This will be one of his main topics when he lectures at U of L Thursday. Author of “Grub: Ideas for an Urban Organic Kitchen,” “Vegan Soul Kitchen: Fresh, Healthy, and Creative African-American Cuisine” and the recently published “The Inspired Vegan,” Terry combines cooking with storytelling, art and music at his events, and he’ll definitely be tackling more serious topics like food insecurity, racism and community health. The presentation begins at 6 p.m. and will be followed by a book signing, reception and food sampling. —Sara Havens

If only there was a place you could order a blowjob as an appetizer as easily as ranch for your cheese fries. Bottoms Up! Productions is charged with delivering sex, revenge and eternal hellfire — all in one night. Writer/director Colby Ballowe’s play, “A Night at the Restaurant,” offers patrons a glimpse of such a dining experience, where people meet, dine and partake in choice carnal activities. “Revenge is a dish best served with chocolate sauce,” Ballowe says. After a short intermission and a cold shower, a dive into Dante’s Inferno is next. Writers and directors Nick Potter and Corey Music invite the audience to see just why “Hell’s Awesome,” a bit of comedy that just might help us all go to church Sunday. “Tonight, we dine in hell,” Ballowe says. —Allison Ray

American theater is not dead. Undead is more like it, at least at the Alley Theater starting Thursday, March 1, with the kick-off of “InHuman: A Festival of New American Undead Theater.” And we’re not just talking about audiences watching zombies on stage — this thing gets in your face. For starters, there’s a zombie costume contest to go along with the opening night presentation of “Mama Didn’t Raise No Zombie!,” and the winner gets a pass to the entire festival ($45 value). There’s also the Inhuman Meet-n-Greet on Saturday, March 3, where you can eat, drink and schmooze with the most photogenic zombies in town. And then there are the actual performances, which run through March 24 — how can you resist fare such as “Zombie! A New Musical!,” in which two audience members per show will be zombie-fied and added to the cast? That’s right, you can’t. It’s time to zombie up — it’s like Halloween in March or something. —Kevin Gibson

My house is right on the boundary between Bullitt and Jefferson counties, and, consequently, it always seems that I live half an hour away from anywhere in Louisville. While I don’t particularly enjoy the constant schlepping all the way from one end of town to the other, living where I do has its benefits. One of these is the entirely different scene that starts just south of the border. It’s just as serious down there about quality, though: Jerry Butler and the Blue-Js were selected personally for this venue by WBRT radio presenter, musical curator and bluegrass fanatic Monroe Rice. As for his show, Butler says, “We just want the folks in attendance to have a good time with us — laugh, cry, sing along, whatever they’re feeling at the time. When we’re done, we want them to be able to say, ‘Now that was fun.’” —Simon Isham

I come from a generation still sick with a hangover left from a retro-tastic decade known as the ’80s. That decade will be proudly on display this weekend when the Arcade Expo returns to Louisville. All the old-school arcade games will be present — time machine favorites like “Asteroids,” “Donkey Kong” and “Pac Man,” — as well as the classic consoles like Atari 2600, Commodore 64 and Nintendo for attendees to play while reminiscing about the old “Contra” code. All the games are set for free play once you’re inside, so prepare for three days of nonstop gaming. Also appearing will be rapper Mega Ran and Mark Alpiger, co-star of the hit documentary “King of Kong.” —Brent Owen

The rent being “too damn high” is not a problem exclusive to the Big Apple; Louisville, too, experiences many of the same price hikes, leaving more and more individuals homeless. In 1920s Harlem, the remedy to an urgently due rent was to host a Rent Party. In 2012 Louisville, the remedy is The Remedy — the band. Joining them will be magicians Patrick and Janice Miller, 106.9-FM host Vicki Rogers, auctioneer Steve Hale, and catering by Masterson’s. The business casual-attire event will also feature a Prohibition-free cash bar. Raisin’ the Rent sponsee St. John’s Center For Homeless Men says this is the largest charity event for the organization, constituting 10 percent of the annual budget. These funds are instrumental in furthering its mission: to help homeless men turn their lives around. —Simon Isham

If you’re still looking for a way to celebrate the 40th anniversary of the Clean Water Act, it’s not too late to buy tickets for Saturday’s “Wild & Scenic Film Festival.” The event will feature eight eco-themed shorts including an episode of “Beaver Creek,” the amusing claymation series from St. Xavier student Ian Timothy. The evening is sponsored by the Kentucky Waterways Alliance, an organization that has been fighting water pollution in the commonwealth since 1993. Memberships to the Alliance will be sold at the door and will entitle visitors entry to a VIP opening reception held before the screenings. For those seeking closer inspection of the KWA’s work, a 10-foot kayak will be raffled off. —J. Christian Walsh

This music is neurotic, so much so that it might help to be inebriated. Luckily for you, they’re playing Harley’s, and the party’s 21+. In case getting wildly drunk in order to glean the secret meaning behind Horseshit’s lo-fi shitgaze isn’t really your thing, this band of horses will be joined by Tropical Trash, Wet Hair and Natives, all of whom have been gathered to launch Michael Powell’s new Louisville-based online mag, Distonal, his successor to the Decibel Tolls. The night promises to be talent-filled and fun, no matter how diverse your preference for jams. Next week, Natives travel to Austin for the SXSW festival, where they will proudly represent Louisville and our lack of fish tacos. —Simon Isham

The 1937 flood of the Ohio River was one of the largest floods in American history, with Louisville getting the brunt of it. Margaret Bourke-White was sent here by Life magazine to photograph the devastation. Louisvillian Corwin Short, in turn, photographed Bourke-White at work. The resulting images are great behind-the-scenes-of-behind-the-scenes (wonder if anyone was photographing Short?). “Short had his cameras with him, taking pictures of Bourke-White at work and recording scenes of the flood for himself as well,” says photo wrangler Bill Carner. “These pictures often had Short’s wry comments written on the backs.” The exhibit “75th Anniversary of the 1937 Flood” has images from the Photographic Archives, with others from Getty Images, including the famous photograph she took at 13th and Broadway of flood victims in a food line. —Jo Anne Triplett

It’s always a challenge to figure out what to do with unwanted books. Many people donate them to the local library where they’re sold to raise funds for various projects. But what if the books don’t sell? Make art from them, of course. Unsold paperback romance novels from an Oldham County Library book sale were donated to the Louisville Area Fiber and Textile Association (LAFTA). What happened next is creativity at its best — they threw down the gauntlet with the “Romance Novel Challenge.” More than 16 members responded, creating such objects as mobiles, bowls and album covers from the bodice rippers. This is great creative recycling. The next time you have leftover books, don’t just trash them, make art. I’m thinking about a coffee table. —Jo Anne Triplett