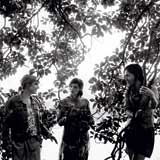 Sally Seltmann, Holly Throsby and Sarah Blasko are three Australian ladies who make up the tri-force vocal powerhouse of Seeker Lover Keeper, each woman claiming a role to seek, love and keep. As already established solo artists with debuts to their names, they met for a bender of pre-lunchtime song sessions that eventually resulted in this low-key supergroup’s inauguration. Though they work well individually, their meetings proved that together they can conjure a captivating range of vocal play. Opener “Bring Me Back” is a pulsing display of choral manipulation, anchored by oohs and ahhs that culminate in a vocal imitation of a singing handsaw being caressed by a bow. Lead vocals are rotated within the trio, from the Norah Jones-esque pipes of Blasko (who commands “Rely on Me”) to the sultry drift of Seltmann on “On My Own.” “Even Though I’m a Woman,” led by Throsby, is easily an immediate favorite for any female whose heart lurches at the line I love the danger in distance. Like the deep love and states of longing they write of, the record is most effective while mending a broken heart.