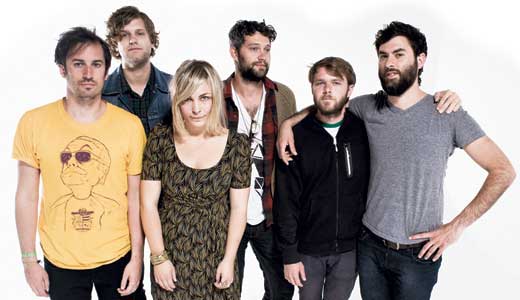 As Sub Pop Records was helping guide Fleet Foxes from obscurity to mainstream success in 2009, the label’s next big widescreen folk-rock band was first meeting each other in a Seattle bar at an open mic.

They recorded their first self-titled album in 2010 and, as it quickly became popular locally, they began touring around the West Coast, adding fans and winning the support of Sub Pop, who re-released a slightly beefed-up version of the album last April. The band toured for the rest of the year, with new friends like My Morning Jacket.

When LEO spoke with Johnson in January, the band was enjoying their first break in a while. “I’m back to living, clearing my head and listening to new music, figuring out what’s most interesting to me right now, before I start writing songs again,” the singer-guitarist said.

For the daunting sophomore album, the self-aware Johnson acknowledges that The Head and the Heart defined their sound so well early on that they now feel wary of painting themselves into a corner. “I think we’re all kind of excited to do something that doesn’t start with slow, gentle, acoustic guitar strumming and all of that …”

But that’s your bread and butter!

“I know, I know, but we can’t keep writing the same song over and over again.”

Those seeing the band for the first time needn’t worry that they’ve abandoned their popular sound already. “We have some songs we wrote around the same time that kind of fit in the same vein of the folky-but-with-piano feel we’ve been playing. We have 13 or 14 songs that we play right now. There’s a couple that are on the iTunes Session (EP) and a couple that sound good when we play them live but, every time we go to record them, there’s something missing that we haven’t figured out yet … That’s the fun part about finally having time off.”

Brand new material will also be tried out on fans, as the members, all of whom contribute, remain unconcerned with overzealous uploaders. Johnson does feel the pressure of heightened expectations, however. “It’s huge! On the one hand, when you write a song that you love, and you’re confident that people are going to also hook up with it, too — until you’ve written that song, it’s like, ‘Oh, man, I’m not gonna write another song that was that good …’”

They remain less concerned with how well the next album sells, and more concerned with living up to their own standards. “I think we’re confident about our instincts, but there’s definitely — when there’s a dry spell, you’re just like, ‘Oh, man, is that magic ever gonna come back?’”

The Head and the Heart

with Drew Grow and the Pastors’ Wives