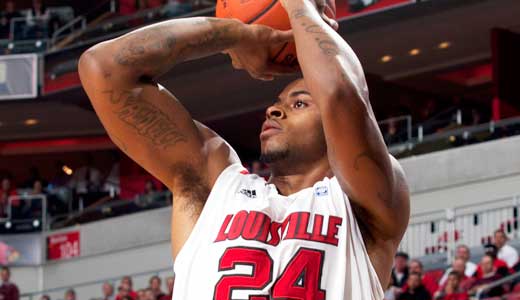 Last Saturday afternoon, the University of Louisville added to its basketball arsenal the one thing it has been missing all season: a scorer.

Early in the first half at West Virginia, freshman Wayne Blackshear, who had missed Louisville’s first 24 games with a shoulder injury, bounced off the bench and quickly sank the first shot of his college career. A three-pointer, no less — though the 6-foot-5 freshman, who averaged 32 points per game his senior year in high school in Chicago, was known no more for long-range bombs than for 15-foot jumpers, or banging in points in around the basket. Blackshear’s first college bucket wasn’t a swish. It was a nicely arced shot that dropped inside the rim, bumped around a bit, and fell through.

Lifted by Blackshear’s five-for-nine shooting, including three threes and some sharp open-court passes, Louisville turned in perhaps its best performance of the season — with all the rest of the parts and people a team needs to succeed, clicking, too. Blackshear’s pass to Kyle Kuric produced the game-winning shot, with Kuric then stealing a West Virginia pass to seal a 77-74 victory. The win ran Louisville’s record to 20-5 (8-4 in the Big East Conference), and lifted it to No. 19 in the Associated Press Poll — setting the Cardinals up nicely for a test against league-leader Syracuse, ranked No. 2 behind Kentucky.

But what a difference two days make. Monday night, Blackshear played just six minutes, missed his only field goal try, committed two fouls, and was taken out in the first half and buried on the bench. Coming off an injury, and playing his first college games, Blackshear didn’t figure to be an instant ace.

“He really doesn’t know what we’re trying to do defensively right now,” explained Coach Rick Pitino, after Louisville lost 52-51 to Syracuse in the Yum! Center. “I went with the veterans because it was a very low-scoring game. I mean, don’t get too excited with what Wayne did the other night (against West Virginia). Generally, when a guy comes in in his first game, he has a big night. Then reality sets in. He’s still not … knowing what we’re trying to do offensively and defensively. Nor should he. We’re trying to get him ready for the DePaul game (Saturday in Chicago). Get him some practices. This was not his type of game. Or Russ Smith’s, for that matter.”

Smith, a 5-10 reserve guard who has been one of Louisville’s best scorers, tallied just three points against Syracuse’s taller guards. Louisville also hit just 12 of 21 free throws, while Syracuse cashed nine of 11.

Blackshear stayed late in the locker room Monday night and hewed to the company line — though obviously disappointed.

“I didn’t fit into the scouting that much, so I couldn’t get to play much tonight — and I should have contributed more on defense,” Blackshear said. “We had the plan we felt we needed at the time, and I’m cool with that. I just want to win. So that’s what we did, and I sat on the bench.”

Still, Louisville almost pulled out a win behind the play of its other prized freshman recruit, Chane Behanan. Behanan ruled the offensive backboards, turning many of his nine rebounds into follow dunks. He hit seven of eight shots, two of five free throws for 16 points. Unfortunately, Louisville didn’t get off a shot at the end that Behanan could stuff back in for the win.

“We worked so hard for this game,” Behanan said. “A couple of missed assignments at the end. It’s basketball.”

But the 6-6 forward from Cincinnati was far from discouraged. “Syracuse is the No. 2 team in the country. They’ve got a lot of future pros on their team. So I just look at the future. Spring back — minus the mistakes.”

Actually, it didn’t look like the Cards made that many mistakes. But the ones they did make stood out because of the snail’s pace of the game. While the victory over West Virginia was played at basketball tempo, with fast breaks and scoring bursts, the Monday night affair with Syracuse was more of a chess match. One zone defense dug in against the other, with a lot of thrusts and parries around the perimeter before the action moved inside. Of course, Syracuse is taller than Louisville, and the notion is that in that kind of a game, height maybe has the advantage. Especially if Louisville has no one able to generate much outside offense.

“It was just a struggle for both teams offensively,” said Syracuse coach Jim Boeheim, who last week recorded his 880th victory, good for third place all-time among NCAA coaches. Boeheim said his team had two goals in the final seconds: cover Kyle Kuric outside, and stop Peyton Siva’s expected drive to the basket. It did both.

“You’ve got to be ready to make those plays,” Boeheim said. “The problem, as I see it, in college basketball, is you get games like this in the NCAA tournament — I don’t care who you are. Tonight, if they make a play, hit one shot at the end, we lose. In the tournament, you go home.

“You’re going to play teams like Louisville — just as good or better,” Boeheim continued. “There’s just no way teams are going to get through the tournament — maybe a game or two, at most — without playing one of these. I guess what I’m saying is you can have five of these games, and then the sixth you lose.”

Of course, that goes for Louisville, too

But the question is whether Louisville wants to play for the careful, perfectly crafted upset. Or, as they say in the country, let the boys run. Get its scorer in there and go straight up against the big boys.