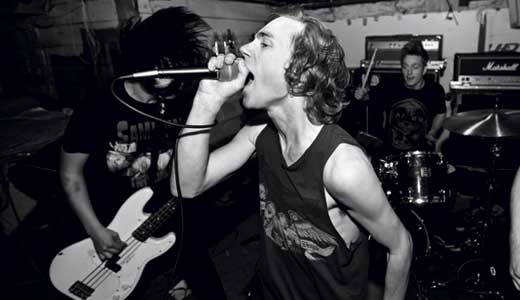 Our Home Is a Deathbed, the first full-length album by the Louisville-based thrashy hardcore punk band Xerxes, will be released next month. Recorded with Kevin Ratterman (Wax Fang, My Morning Jacket) at his Funeral Home studio, the album is a big step forward for the precocious quintet, who will play a show at a secret location this weekend. LEO spoke with bassist Will Allard in December.

Will Allard: It’s getting really crazy. We did a bunch of touring earlier in the year (2011), then we took time to write the record; we did basically nothing but put all of our energy into that. We’ll be gone most of 2012.

LEO: On the first leg of the tour, coming back through here, you’re doing 40-some cities in about 40 days?

WA: Yeah, 41 shows in 41 days. Then we’re home for three weeks, then we go out again. It should be pretty wild.

LEO: Why did you want to work with Kevin Ratterman on this album?

WA: We went with him because of his past roster. He was awesome to work with, the vibe of the studio fit our needs, and it was an awesome experience. We didn’t want to go anywhere out of Louisville, we wanted to keep it all in the circle. Not to sound cheesy, but keeping it where home is, keeping it Louisville, I guess.

LEO: What does that mean to you?

WA: We grew up all loving the bands that were before us — like Mountain Asleep, who’s our brother band, and Coliseum, Young Widows, By the Grace of God, Breather Resist — all those maximum Louisville bands.

LEO: How long do you think it will take before younger kids start citing you as an influence?

LEO: What’s the age range of the band members now?

LEO: That’s pretty young to have gotten as far as you guys have come already.

WA: Yeah, we’re all a bunch of youngsters. We’ve been doing this since we were, like, 16, and we’ve been touring since we were 17. We wanted to just do it, and take advantage of being young while we can abuse our bodies, you know? (laughs) When you’re 30, you can’t really go out for 41 days in a row and expect to function.

LEO: When you talk about abusing your bodies, are you talking about playing and jumping around?

WA: Yeah — sleeping on floors, loading in to dirty venues, playing a 15-minute-long set and abusing your body by letting it all pour out, just burn it all out in 15 minutes or so.

LEO: Can you look ahead to 30 and guess if you’ll still be playing music like this? Or will you turn into one of those ex-punker folk singers or rockabilly guys?

WA: (laughs) No, I’ll be doing this for forever, so … the only thing I know is this is all I want to do, and the same goes for everyone else in the band. We’re not really good at anything else (laughs).