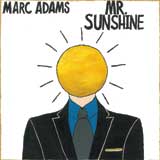 Life isn’t like kindergarten. One doesn’t get high marks just for “satisfactory”; it’s sink or swim. And merely having an obvious love for something doesn’t automatically bring the accolades. Marc Adams has just released his debut long-player, Mr. Sunshine, and, though the production is solid, and his ideas promising, the album just falls flat. Like the late Guru said, “It must be the voice.” The GangStarr MC used this line as a brag for his well-known monotone; for Adams, however, the opposite is true. His delivery is nasal and he sounds perpetually out of breath. On many songs, you can hear his effort to drag out a syllable to end a bar on the beat, lending to an amateur-sounding effort that’s not quite ready for prime time.