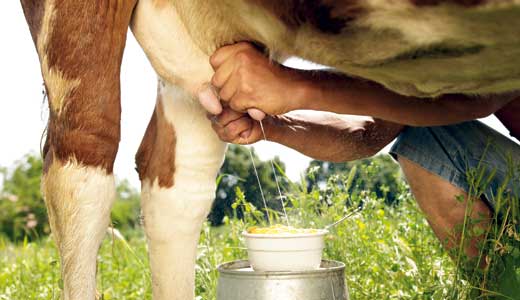 A bill currently moving through the state House of Representatives is making strange bedfellows of left-leaning locavores and freedom-loving libertarians. SB 47 would define the rules for “cow shares” in Kentucky, clearing the way for consumers to buy directly into the livestock products of family farms. In addition to creating a shorter path between farmer and customer, the measure would clarify rules on raw milk distribution within these sharing groups.

A debate on the safety of unpasteurized milk is one of the key hurdles facing the bill, which is sponsored by Sen. John Schickel (R-Boone County). Another is that some lawmakers remain unconvinced that such legislation is necessary, considering there’s nothing on the books forbidding cow shares.

Asked to explain the need for SB 47, Tim Mayer, a spokesman for the Community Farm Alliance, which lobbies in support of the bill, said that passage would eliminate a legal gray area being exploited by overzealous regulatory agencies.

“We have farmers who were visited by the Milk Safety Branch. Threats were made against them. Some farmers were told that on the next visit, they’d be issued a warrant, or have their milking equipment taken away,” Mayer says.

John Moody, who manages the Whole Life Buying Club, was on the receiving end of one of those visits. Last year, the Kentucky Department for Public Health quarantined 76 half-gallons of Whole Life’s fresh milk, while Louisville Metro ordered Moody to cease and desist. Despite being advised by his attorney that he was in the clear, Moody knew the seizure was coming months in advance. An email from a national farming and nutrition group informed Moody that the state’s Public Health Department would soon start “shaking down” all of the Kentucky farmers listed on Realmilk.com, a website that helps customers across the country locate raw milk products.

“Within 48 hours, I began to receive phone calls from across the state from small farmers who had been met by agents of the state health department who sought to intimidate them, threaten them, etc., even though all these farmers were doing was herd shares. So the idea that the legislation is unnecessary does not jibe with the history of the past two years,” Moody says. “These are exactly the bills we need if we are going to protect small farmers and people’s access to real food.”

Senators Robin Webb (D-Carter County), a co-sponsor of the bill, and Robert Leeper (I-McCracken County) echoed concern about these scare tactics during the House floor debate. Leeper testified, “The reason this bill has occurred is because someone took it upon themselves, with no outbreak occurring, to quarantine and stop a process that was happening. People reacted to that and said, ‘We need protection to do what we choose to do.’”

Is it safe?
Linda Stone, who runs a three-cow dairy farm and has been sharing raw milk for 30 years under the label “Not for Human Consumption,” says the most common description of her cows’ (Goldie, Libbie and Willow) Jersey milk is “melted vanilla ice cream.”

“That seems to be the general consensus. Because of the cream and fat content, it’s heavier milk. It’s sweeter, because it’s not been cooked and processed,” Stone says.

Stone believes the perceived risks of raw milk from small farms like hers are overblown and that taxpayer money is wasted each time a state agent pounds on her door to inform her she ought to be pasteurizing.

While Stone admits her beliefs are based on years of personal experience and not necessarily documented science, the same can be said of those arguing against SB 47. In fact, both sides of the debate have used the same Centers for Disease Control report to state their case: Those in favor point to the relatively few raw milk illnesses compared to more common products, like spinach and melon. The nays tend to hold up the two deaths that have been attributed to raw milk since 1998.

Regarding that statistic, the bill’s supporters are quick to point out a revision they had enacted to the CDC report through a number of Freedom of Information requests. The raw milk deaths were actually caused by unsanitary handling after purchase — in one case when it was used to make Mexican white cheese in a bathtub.

“I’m sorry, but if you eat cheese that I made in my bathtub and you die … you just get a Darwin Award,” says John Moody.

If the bill is enacted, Linda Stone says the biggest difference would be relieving the conflict experienced by some of her customers, who are uncertain whether they’re breaking the law when they drive off with their bottles of “Not for Human Consumption.”

To those would-be fresh milk drinkers still on the fence about the product, Stone says, “Meet your farmer personally. See the farm where the milk is produced. Find out who else is being supplied, so you have a reference.”