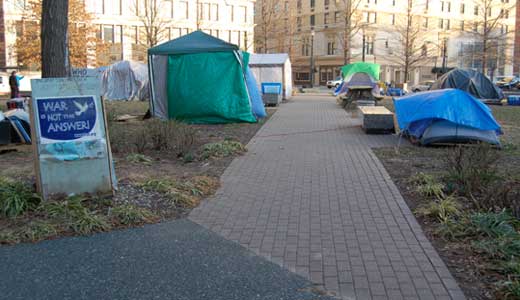 Around Christmas — a time when controversy typically slows down — Occupy Louisville protestors found themselves embroiled in a fight. The city wanted to eliminate overnight camping at Occupy’s headquarters in Founder’s Square Park, and the dispute has since landed in federal court.

As the struggle gained news coverage, the fact that Occupy’s tents housed several homeless individuals surfaced as an issue, and for some, a reason to quash the protest. Occupiers pushed back, pointing to what’s been described in the media as the “terrible” state of shelters in Louisville. They requested a meeting with city officials so they could hear from homeless individuals who feel safer camping than spending their nights in crowded and sometimes filthy, dangerous shelters.

A handful of Occupiers have now met twice with the Metro Department of Codes and Regulations, the agency that as of 2011 started licensing homeless shelters.

David Barfield, an Occupy member who’s been in and out of jobs and homelessness for years, has attended both meetings. The 52-year-old, with his small frame and husky voice, says there were various reasons he decided to leave the Salvation Army’s Center of Hope for Founder’s Square: bedbugs, conflicts with a roommate, and a stolen backpack, just to name a few. He says he’s grateful for the Salvation Army’s culinary program and the new set of skills he’s gleaned from it, but he’d rather be arrested for trespassing than return to shelter life.

“I tried Wayside like four years ago, but being an out, homosexual guy at 52, it’s not easy to get along with 600 other men in a building,” Barfield says, likening it to a tough crowd thrown “in a can together.”

According to the National Coalition for the Homeless and U.S. Department of Housing and Development’s 2010 homeless report, about 25 percent of homeless suffer from a mental illness. More than a third struggle with addiction.

“You’ve got a cross section of humanity that’s coming up that ramp every day,” says Ed Wnorowski, executive director of St. Vincent de Paul in Louisville. “They have issues just like the rest of the community. It just kind of concentrates it for a brief period.”

“Shelters can be very chaotic. That’s just the nature of it. It’s not that anyone is doing a poor job,” she says. “And for anyone with an abuse history, or who has a mental illness, or is claustrophobic, sometimes it’s more comfortable to stay out on the street.”

Nuisances like bedbugs, altercations, theft and vandalism were present in each shelter — the frequency correlating with the size of the facility. At Wayside, drug activity around the property (not always on the property) is commonplace, deterring those trying to achieve sobriety.

But over the last month, as city officials and Occupiers have met to conceptualize where shelters need improvement, one primary concern that’s been relayed is far less tangible and, perhaps, harder to address: that the complaints of the homeless are simply not being heard.

On a recent January evening, about 50 teams of four or five people walk downtown streets in a soft, chilly rain. Volunteers from the Department of Veterans Affairs stop a pack of men charging toward Jefferson Street Baptist Church, hoods on, hands stuffed into pockets.

“Excuse me, we’re looking for homeless people. You seen any?” asks Tony Mathis, one of the volunteers who works as a VA social worker.

With a pen and yellow folder, Mathis’ team keeps a running tally. Tonight is the Coalition for the Homeless’ annual homeless count. Last year’s count showed a total of 1,628 homeless people, including 92 unsheltered, on the street in Louisville. It’s estimated that in nice weather, a couple hundred homeless men and women sleep outside.

Mathis says most of the veterans he works with opt for shelters, particularly during “white flag” days, when temperatures dip below 35 degrees or rise above 95 and the fire marshal allows shelters to receive the needy in numbers beyond building capacity.

Chris Mandrell, a homeless veteran LEO met at the St. John Center’s day shelter, says on cold evenings he parks himself in line at St. Vincent de Paul’s Ozanam Inn. Once a lottery is conducted for the 42 emergency beds, everyone must shower and stay on campus, a rule specific to Ozanam. Drinking isn’t allowed. For 58-year-old Mandrell, the orderly, small facility is ideal. If he doesn’t get in, he often opts for a patch of woods along Dixie Highway rather than a larger shelter, like Wayside, which has 331 emergency overnight beds for men, about 100 for women, and dozens of other spaces for transitional living situations.

“I don’t like being around other people. I can’t stay here all day,” he says, gesturing to the rows of men at St. John’s quietly sipping coffee and watching TV. “I would go nuts.”

Nina Moseley strives for Wayside to be a haven for those who can’t find a spot elsewhere. “We serve the least, the last, and the lost of Louisville,” she says, reciting Wayside’s 60-year-old mission.

Guests are allowed to stay onsite all day or come and go, unlike other facilities that ask clients to leave in the morning. As director, Moseley says she’d rather have guests in house where staff can engage them in recovery, employment or educational programs, rather than out on the street. But she acknowledges an open door policy that hosts hundreds of strangers can lead to problems.

Despite 96 security cameras and onsite security staff, Wayside racks up several hundred police calls annually. Most are resolved without a report. Thirty-five Louisville Metro Police reports were written up at Wayside last year, with assaults and stealing among the most common crimes. (The Salvation Army’s Center of Hope totaled 31 documented police reports last year for similar disturbances, and 19 in 2010, while Ozanam had eight in 2011, and only one assault in 2010.)

All three shelters have dealt with bedbugs at least once since 2009. Each instance is addressed swiftly, according to environmental and health inspection reports. Wayside has a licensed pest control officer on staff. (Hotels, dorms and other boarding facilities have also struggled with bedbugs in the last few years.)

Wayside has been cited twice in two years for large amounts of debris accumulating around Dumpsters. Over the last two years, those Dumpsters attracted rodents that burrowed into the building. In 2010, a rabid bat bit a child. It had come through a missing ceiling tile in a bathroom. A colony was found and eradicated. (An inspector tells LEO that bats like to roost in older structures, like Wayside.)

Moseley says they do the best they can given their tight quarters and transient clientele. The city’s new licensing process for homeless shelters requires more thorough inspections. Also, mattresses must now have some kind of vinyl or plastic covering, in part to cut down on bedbug infestations.

In theory, this should help mitigate nuisances one can expect at a shelter. But will it decrease frustrations? Not likely.

Natalie Harris, executive director of the Coalition for the Homeless, says her office hears two or three complaints about shelters each week. Rarely is it health or sanitation related. Instead, it’s often rooted in conflicts with staff, anger over bed assignments, or a sense of being looked down upon.

Every shelter has onsite grievance procedures. The Coalition for the Homeless mandates it as part of their quality assurance standards that must be met in order to receive city funding. St. Vincent de Paul’s Ozanam Inn requires guests to read and sign a copy of the grievance policy prior to their stay.

But some homeless individuals fear retribution if they complain. Others don’t feel anyone will listen.

Shelters certainly have an increasingly difficult job. Over the last several years, funding streams have dwindled as demand has risen. At both Wayside and Center of Hope, maintenance and administrative staff have been reduced.

“They’re really stressed out and really struggling to provide services,” Harris says. “But they do want to listen. I just don’t know if they have time for it.“

Neil Donavan with the National Coalition for the Homeless once ran a shelter that housed about 2,000 men and women. He remembers voluminous complaints lobbed at his facility. And while he’s quick to acknowledge many frustrations are warranted, he says this can be a dyspeptic population.

“There’s not a whole lot you can do when you’re homeless,” Donavan says. “If you want to rage against the machine, it’s quite unfulfilling because no one listens to you. So you’re universe is kind of small, so you try to control the environment you live in, and one part of your environment is where you lay your head.”

Donavon says complaints often reflect a person just trying to make their life a little better, even if it’s simply taking issue with a loud snorer. The average homeless person, he says, only gets 2.5 hours of uninterrupted sleep per night, a maddening sliver of peace.

Center of Hope on Brook Street has 100 beds. In a worn-out, second-floor dorm reserved for random, night visitors along with those who work, go to school or are enrolled in a self-sufficiency program, bunk beds sit about a foot apart. That will improve in March when the shelter is scheduled to move into the old Male High School across the street.

Its director, Matt Yates, says he tries to work through problems that arise with clients, and points out that some of those sleeping on the streets are not doing so out of dissatisfaction, but have been banned for assaulting staff.

“I try to address everything in this office,” Yates says. “I try to be as fair as possible and explain to them in a way that satisfies their frustration. I may not tell you what you want to hear, but maybe I can help you be less frustrated and hear our point of view.”

At Wayside, a committee that includes homeless representatives hears grievances. The shelter also has a weekly meeting for guests to air frustrations. Still, Moseley realizes even if her shelter was perfect, the very nature of how it operates will always draw ire. Adults, as a general rule, desire independence, something that’s nonexistent in shelter life.

“You don’t’ have control of your life. You have to eat at a certain time, you can’t take food to your room …” she says, listing off a few of Wayside’s many rules. “We don’t let people stay in bed all day. Even if you don’t have a job, you have to get up, get dressed.”

Expectations can aggravate guests to the point of no return, Moseley says, but still, she’s sympathetic. She, along with other shelter directors, attended the latest meeting between homeless Occupiers and the city. She took copious notes as to what was upsetting to them: chaotic meal times, the splitting of families into men’s and women’s shelters, no voice in the system.

That last grievance may soon change.

As a result of the two meetings with the Department of Codes and Regulations, there is an effort under way to create a regular homeless forum, a venue to vent and advocate.

Homeless Occupier David Barfield embraces the idea, which is similar to the weekly General Assembly meetings held at Occupy Louisville. He credits Occupy for helping initiate conversations around economic inequity and homelessness.

Over a cup of coffee, he says he feels strong and confident with his new role as activist — something he hasn’t felt in a long time.

“I have people who walk by, who I’ve never seen before, but because of my exposure in the media will say, ‘Good job, Dave. Keep it up … Thank you.’ It’s emotional for me,” Barfield pauses. A few tears crawl from behind his glasses. “I’m not used to that.”