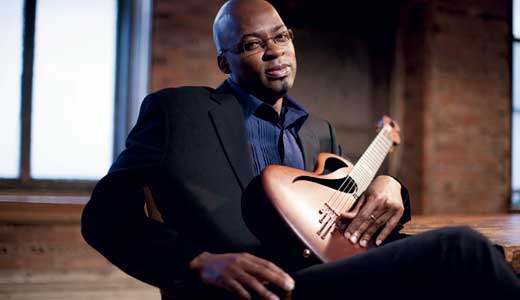 Many Louisvillians who saw Herbie Hancock’s concert at the Brown Theatre in 2010 were introduced to the subtle yet powerful playing of his guitarist, Lionel Loueke. This time, Loueke returns for a performance at the University of Louisville, where he’ll lead his longstanding Gilfema trio with bassist Massimo Biolcati and drummer Ferenc Nemeth.

“I want our students to experience and be exposed to as many styles of improvised music as possible,” says Michael A. Tracy, director of the Jamey Aebersold Jazz Studies Program at U of L’s School of Music. “Lionel’s very singular way of playing offers such an experience. We also have a large international component in our program … I was knocked out by Loueke’s fresh and highly creative playing with Blanchard a few years ago.”

LEO interviewed Loueke via email from his home in the West African nation of Benin.

LEO: On your 2010 album Mwaliko, there is a song called “Griot.” Are you from a Griot family? Has the Griot tradition influenced your approach to jazz?

Lionel Loueke: No, I am not from a Griot family. Yes, the Griot tradition influenced my approach to jazz because the Griot, like the messenger of the king, always improvises by using words, melodies and rhythm, just like a jazz musician.

LEO: Your bio says George Benson was an early influence and led you to jazz. What did you find in his work that made you want to pursue jazz?

LL: George Benson was my early influence because I had never heard anything like that back then. I was touched by his approach to the music and impressed by the way he was scatting at the same time with his guitar and his voice. I was also influenced by my favorite guitarist of all time, Wes Montgomery.

LEO: You have toured and recorded with such icons as Herbie Hancock and Terence Blanchard. What do you learn from these experiences that helps you to grow as a musician?

LL: I learned to let the music tell me what to do. I also learned that the music is what I do, but not who I am, after all. Knowing who I am as a human being helps me to approach the music differently.

LEO: What special qualities do you find in your Gilfema trio that you enjoy?

LL: Ferenc and Massimo have the same vision as I. We are not afraid to make mistakes or to challenge each other. Also, we let the music guide our imagination.

LEO: When you lead classes here, what do you try to convey to students?

LL: I like to listen to the students first to be able to work with what they might need. I don’t like to prepare a workshop, especially since I never know what the student’s level is, but I answer their questions and offer them my experiences. I’m looking forward to teaching and playing in Louisville.

LEO: Are you working on a new album?

LL: I just recorded a new CD for Blue Note Records, which I co-produced with Robert Glasper, who played piano and keyboards. Derrick Hodge played electric bass, Mark Guiliana played drums. The album is called Heritage and will be released later in the year — I am very excited about this new project.

U of L, Comstock Concert Hall