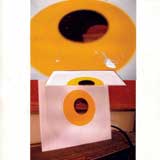 Every diehard’s dream was realized when the golden boys of Guided by Voices rallied together for another go as a classic line-up. A tour ensued, and then came Let’s Go Eat the Factory. But traces of Robert Pollard’s previous endeavors weren’t left behind. “Hang, Mr. Kite” brings back the eerie wave of Circus Devils from the Fading Captain years, although this record is held up by solid backdrops, rather than sketchy track collages. That charm is missing here. Slow-jam noodling in “The Big Hat and Snow Toy” leads to “Waves,” which rides over a joyful hum and buzz. It’s not uncommon to replay GBV songs more than once; they’re still pretty short (and catchy numbers like “God Loves Us” and “Spiderfighter” make it an automatic decision). Meanwhile, the acoustic explorations “Go Rolling Home” and “The Room Taking Shape” resonate like familiar off-hand throwbacks. Let’s Go Eat the Factory is a more attentive GBV, yet they remain timelessly isolated from modern rock.