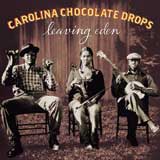 Making an album after a founding member leaves a band is always a precarious situation. Ears tend to be overly critical, allegiances are sworn, and albums with a personal history are compared to the brand new record, as yet unattached to anecdote or reference. It’s unfair, but that’s the way it is. Though Justin Robinson’s exit was reported as amicable, when there’s only a month’s separation between your first solo effort and your former band’s newest offering, that’s rarely coincidental. Trading Genuine Negro Jig’s producer Joe Henry for Buddy Miller this go-round is a push; Miller’s light touch is invisible here. Two new additions include multi-instrumentalist Hubby Jenkins and cellist Layla McCalla. As on previous records, the songs that feature vocalist Rhiannon Giddens front and center are the best, including the spectacular “Country Girl,” the title cut, and a cappella (save for crickets) closer “Pretty Bird.”