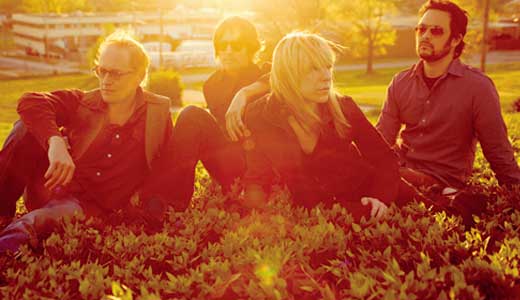 Heartless Bastards began in Cincinnati clubs and, less than a decade later, have established themselves as one of the most vital rock ’n’ roll bands left. Just in time for the so-appropriate Valentine’s Day, Heartless Bastards’ fourth album, Arrow, produced by Spoon’s Jim Eno, will be released. Bandleader Erika Wennerstrom, who spoke with LEO, moved to Eno’s Austin, Texas, four years ago.

“I moved to Austin because I was in a nine-year relationship, and we split up. I happened to have family here, and my management at the time was located here. So I had a support system to help me get started,” Wennerstrom says. “Although I think Austin’s a great music town, and I love living here, that’s not what drew me here. I think a lot of people assume that, but … it’s a nice perk to living here.”

Wennerstrom’s tendency to travel influenced her latest record in some unexpected ways. “I’m really proud of it,” she says of the new album, the band’s first for Partisan Records after three albums released by Fat Possum Records. “It took me probably three years to write. I’d had melodies over a two-year period popping in my head, but once we got done touring from (2009 album) The Mountain, I started sitting down and focusing on how to say what I wanted to say in the songs. I have some sort of A.D.D.-focus problems, so I ended up deciding to take some road trips.”

Wennerstrom got in her car and drove around for a month or so, from Austin back up to see friends and family in Ohio, then over to the Catskill Mountains.

“I met up with some friends who were playing at (the festival) All Tomorrow’s Parties in the Catskills in New York, fall 2010. That was inspiring. I stayed in a cabin up there after it was over on my own for several days, then I drove down to the Alleghenies in Pennsylvania and found a place there, a cabin on a lake, to stay. It was a campground, but, on weekdays, it was pretty vacant.”

From there, she continued on to Arkansas, where her father once lived near Hot Springs, before landing in a friend’s house on a ranch outside the famed artist colony of Marfa, Texas.

“I think, through that process, I didn’t get done nearly as much as I’d hoped, but I feel like it was a lot of the inspiration for what I did end up writing,” says the 33-year-old native of Dayton, Ohio. “There’s a lot of imagery from the trip, and certain lines would pop in my head when I was driving. They would guide me to finish the songs. I brought the songs in to the band, and we all started working on them. Jim Eno, who produced the album, made some suggestions; one of his suggestions I really liked was touring on the songs before we recorded them. So we opened up for the Drive-By Truckers on a month-long West Coast tour last spring, then we went right in the studio two days after we got back. I really feel like it created a real live sound to the album. A lot of the takes that we did, there’s not a lot of added instrumentation and filler.”

Wennerstrom is happy for the success her friends The Black Keys have had, and is realistic about the Bastards’ place in the universe.

“I’m really proud of what I’ve accomplished so far. I do what I do, and release songs to the public because I want people to hear them — so, sure, as many people as will like a song that I create, that feels good. If I were to only go as far as I already have, as far as people being aware of who the band is, I’m content. I love what I do, and I want to do it for as long as I’m capable of it. And I’m going to do it whether I have five fans or 5 million, or … something (laughs). There’s just something in me that needs to create, and this is my way of expressing myself. I’m going to do that, whether people hear it or not.”

with Hacienda and Houndmouth