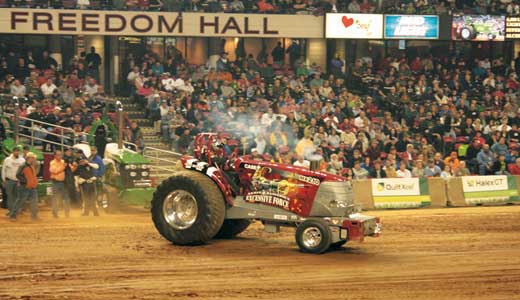 A man with the grandfatherly face of Wilford Brimley tenderly removes his glasses. He tilts his face up, an invitation. Down she leans, led by a quivering storm of silicone and flesh that slaps at his face. All around him, a generous slice of the heartland stirs, draining domestic longnecks, winding down from a day at the fairgrounds.

It’s a big weekend for Louisville. The four-day convention has earned the title of second-biggest event as far as economic impact, according to the Kentucky State Fair Board. A 2005 analysis by the University of Louisville’s College of Business showed that the farm show reaped $21.5 million in revenue for the city. It’s estimated that this year the event will hang on to its second place spot, bringing in $13 million, according to a spokeswoman at the Louisville Convention and Visitors Bureau.

Sure, this is far behind Louisville’s premier party — the Kentucky Derby. The weeks building to those manic two minutes include an amalgamation of events that reportedly injected $128 million into Louisville’s economy last year. (When Breeder’s Cup is in town, it nabs runner-up status by bringing in up to $50 million.)

Regardless, LEO decided if we devote an entire issue to Derby nightlife, surely we should check out our city’s junior moneymaker. First stop: strip clubs.

You may recall, in a July issue of LEO, attorney Frank Mascagni III, who represented strip clubs fighting the 2011 ordinance requiring ladies to cover up, among other things, issued a dire prediction: The ordinance would deter conventioneers from visiting Louisville, specifically farm show attendees.

“The Farmers … are never coming back to Louisville. We’re going to lose millions of dollars in convention trade,” he said.

But LEO is happy to report that doesn’t appear to be the case. Upon arriving at P.T.’s, it was hard not to notice a dancer propped up on her elbows, counting fistfuls of cash, a bounce of her thonged-rear denoting each dollar.

LEO called P.T.’s manager Brian Franson to get his take on the hustle and bustle. Franson bemoans that indeed some longtime Farm Machinery Show visitors haven’t shown up since the ordinance took effect. Still, farmers “want to let their hair down,” he says. On a typical Friday night he might see 150 visitors. With the show in town that number soars to roughly 400. Derby might hold more prestige, but Franson says farmers loyally produce about “80 percent” of his Derby weekend business.

“Personally, I talk to everyone who comes in,” he says. “(We’ve had) Michigan, Nebraska, Ohio, Wisconsin, Minnesota, North Dakota, South Dakota, Montréal, Toronto, Michigan. You writing all this down?”

According to the Fair Board, the Farm Machinery Show, now in its 47th year, draws 300,000 visitors, both from the Metro region and out of town. It packs hotel rooms for multiple nights, not just with farmers but agribusiness journalists from all over the world, as well as 800 vendors that fill 1.2 million square feet of event space at the Kentucky Exposition Center.

“Exhibitors have expense accounts, they go to a lot of restaurants. You see people, a lot of people, all over town,” explains Amanda Storment, vice president of Media and Public Relations with the Fair Board.

The show certainly impresses, with its massive crowds and towering machines only an industrialized food system could birth. In Freedom Hall on Saturday afternoon, the potent sweetness of roasted nuts blends with acrid fumes from souped-up tractors dragging burdensome amounts of weight.

But we digress. Back to the nightlife.

It’s 10 p.m. at Fourth Street Live. Swarms of stocky men in plaid shirts belted into denim, hunting camo and even a few overalls signal this is a hot spot. Over the growling vocals of a country cover band, LEO asks Ernie Holston, from northern Illinois, why he comes to the show.

His full, round cheeks flushed, he replies, “The show … and drinkin.”

Chris Schroeder breaks it down with pure, upper-Midwest pragmatism.

Honestly, don’t most attend conventions under the unspoken agreement that with promised enlightenment will come guaranteed boozing? Franson concurs and rattles off other profitable shows.

The “pumpers” convention (for those in the sanitation/sewer/portable toilet business) used to triple P.T.’s business, but the show was recently lost to Indianapolis. Franson also rakes it in with the Mid-America Truck Show, as those guys “just want to look at trucks and party.”

Back at P.T.’s, with the midnight hour and the dawn of the farm machinery show’s last day approaching, a pleasant crew from just outside Champaign, Ill., tells LEO they’re at the strip club for a fellow farmer’s bachelor party. They give their weekend in Louisville glowing reviews.