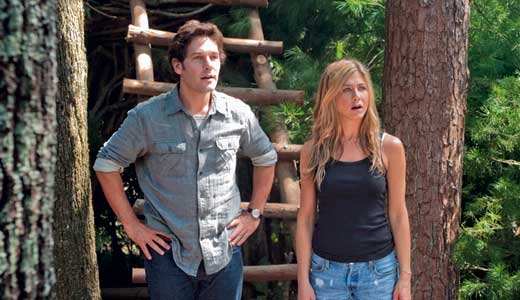 While not the greatest comedy to come out recently, “Wanderlust” is saved by its eccentric character actors and R-rated gags. It’s like a blind date. You go on them for a random experience and to get out of the house on a Friday night. You don’t go in expecting to find your soul mate. Instead, you usually end up with a funny story to share with your friends the next day. There will be jokes and characters from “Wanderlust” you remember the next day, but overall, the plot is a bit hackneyed and predictable.

Directed by David Wain (a key member from “The State” sketch show from the ’90s), the film starts out at a brisk pace but drags on about halfway through. The storyline is simple: George (Paul Rudd) and Linda (Jennifer Aniston) are living the fast-paced Manhattan life until … George loses his job and Linda’s documentary gets passed on by HBO. They pack up their car and decide to head south to Atlanta, where George’s asshole brother and his stoned-out wife live. On the way down, they stumble upon a commune of sorts called Elysium. Populated with dozens of free-spirited eccentrics, some who believe clothing is optional, George and Linda spend one night and instantly fall in love with the community’s love of life rather than possessions.

The couple decides to continue on the next day to Atlanta, but when tensions between George and his brother heat up, they find themselves taking up permanent residence back at Elysium. It’s all fun and games until George realizes that living in this strange community will not help him get back on his feet job-wise, and competing with alpha-male Seth (Justin Theroux) for Linda’s affection isn’t doing much for their marriage.

The cast definitely is not to blame for this film’s mediocrity. Rudd and Aniston are effortless at physical comedy and do a fine job playing the everyman thrown into an odd situation. They react to the grape-stomping nudist exactly how you would. But there are only so many dick-in-the-face jokes you can pull off in a two-hour film.

The other oddballs who populate the commune also add to the film’s comedy. Credible actors like Alan Alda, Kathryn Hahn, Lauren Ambrose (Claire from “Six Feet Under”!) and Ken Marino bring their own unique bizarreness to their characters.

If you enjoy easy laughs and awkward comedy, try out “Wanderlust” for one date. Just don’t expect much substance … and definitely don’t expect it to pick up the tab.