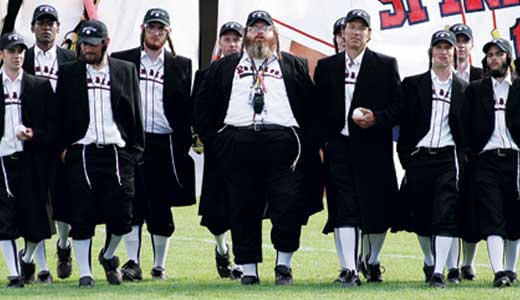 It doesn’t look like anyone’s going to catch up with it. At 14 years of age, the Louisville Jewish Film Festival is easily the longest-running fest in a town that has its share of annual film series. It may also be one of the most underappreciated. Produced by the Jewish Community Center, each year’s selections have been curated with an eye on what’s happening in world cinema, often providing Louisville’s only theatrical appearances of some of the past year’s best work.

To be sure, the material explores Jewish identity and Israeli-themed narratives; however, the appeal of much of what’s offered here tends to be wider than its focus. A certain rye bread’s classic ad campaign comes to mind; no, you don’t have to be Jewish to dig a film like “Restoration,” which was nominated for 12 Israeli Academy Awards and took Best Picture in 2011. At Sundance last year, “Restoration” also claimed a prize for its screenplay, which follows Fidelman, an old wood restorer who’s coping with the death of a longtime business partner, as well as the looming end of his shop. While Fidelman restores a 100-year-old Steinway, complexities develop between him, his son and the business’ cagey new assistant in a story that is more a character-driven, art-house chronicle than something we’d file solely under “Israeli film.”

The same can be said for the festival’s opening night feature, “The Human Resources Manager.” Imagine a far less sunny “Little Miss Sunshine,” centered around the winding transport of a woman’s remains from bomb-stricken Jerusalem to the cold, dismal countryside of her native Romania. This somber road movie offers true moments of dark comedy and tenderness between the film’s title character and the troubled, young son of the deceased, as they’re tasked with returning the body to its birthplace. The unexpected twists in the road are many, sometimes unlikely, but always compelling.

Like 2011’s “Restoration,” “The Human Resources Manager” was the most highly touted Israeli film in the year of its release (2010). It earned five Israeli Academy Awards: Best Film, Direction and Screenplay among them. It will be screened with a short film called “The Constant Fire,” from New York filmmaker Stuart Weinstock. Weinstock will be on hand for the opening reception following the show. His 10-minute film follows the tense interactions between four Israelis trapped in a bomb shelter together.

Other possible JFF standouts include “Dolphin Boy,” a documentary about a young Arab-Israeli who receives dolphin therapy after a brutal beating claims his ability to speak. The treatment proves successful, but has one unforeseen side effect — the teen believes he was raised by dolphins. “This is Sodom” is advertised as an “Israeli Monty Python.” The raunchy blockbuster is based on the biblical character of Lot and his fellow, suffering citizens who try to ward off the temptations of sex, gambling and all that Sodom has to offer.

“Nicky’s Family”
Sunday, Feb. 12, 3 p.m.
A doc about Nicholas Winton, an English stockbroker who was in Prague at the onset of WWII. Winton devised a way to send more than 600 Jewish children to England, saving them from the Nazis. “Winton’s Children” have gone on to produce nearly 6,000 offspring.

“Berlin 36”
Thursday, Feb. 16, 7 p.m.
Based on the true story of Gretel Bergmann, a Jewish high jumper, who the Nazis tried to ban from the 1936 Olympics in Berlin.

“The Yankles”
Sunday, Feb. 19, 3 p.m.
A kind of a Jewish “East Bound and Down,” where a washed up, former big-leaguer helps a group of hapless rabbinical students start a baseball team.

“Eichmann’s End”
Tuesday, Feb. 21, 7 p.m.
A Holocaust survivor in 1950s Buenos Aires has his suspicions aroused when his daughter brings home her new guy, a German by the name of Nick Eichmann.

Closing event and reception:
“Lenin in October” & “Half a Ton of Bronze”
Saturday, Feb. 25, 7:30 p.m., $15
At Adath Jeshurun Synagogue
Both of these hour-long comedies from Israel happen to feature statues of historical figures — Lenin for “Lenin in October” and Alexander Zaid in the case of “Half a Ton of Bronze.” Zaid was a legendary Zionist whose tribute was cast in bronze and stolen years ago for scrap metal.