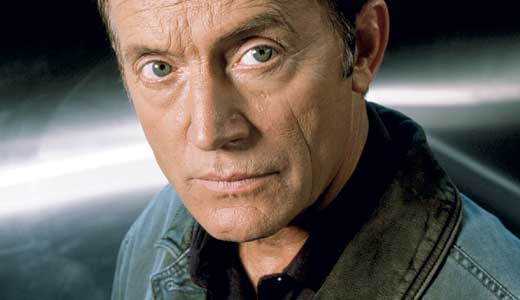 The Derby City Film Festival hits its stride this weekend, screening a trove of 56 films that are as international as they are local. Work from 16 countries will hit the Clifton Center screen in this fourth edition of the fest, in addition to 14 films with solid, Kentucky roots. One such selection is a lost-in-the-woods thriller called “It’s in the Blood,” from the Louisville native filmmaking tandem of Scooter Downey and Sean Elliot.

Saturday night’s screening of “It’s in the Blood” marks a homecoming for Downey (the film’s writer-director) and Elliot (its co-writer and co-star). The filmmakers will arrive with lead actor Lance Henriksen in tow. Henriksen will receive a DCFF Lifetime Achievement Award for a 40-year career that has included roles like Bishop in “Aliens” and Frank Black from the TV show “Millennium.”

Henriksen will be on hand Saturday for a post-screening Q&A, a book signing of his new autobiography “Not Bad for a Human,” and an acting panel. The busy performer recently finished a TV series called “Bring Me the Head of Lance Henriksen,” and he spoke to LEO during a break from a comic book that he’s helping create.

LEO: Kudos on “It’s in the Blood.” Scooter and Sean are Kentucky boys. Have they done Ballard High School proud?
Lance Henriksen: When I met Sean and Scooter, they were very young filmmakers, but I really grew to respect and like them a lot. This was a passion project and a physically challenging movie. It was in the woods of Texas the whole time, in really the outback of Texas. But it was a great experience. Their families came down for the shoot and made me feel like I had a neighborhood there. I’m really happy to be coming to Louisville to support this film. I can’t wait to get there and talk about it.

LEO: You’ve worked with the James Camerons and John Woos of the world. Is there a special appeal to switching gears and taking on lower budget projects with first-time filmmakers?
LH: You know, there is no such thing as low budget acting. If I get a script and I can relate to the characters and know that I’ll have an adventure doing it, then it isn’t about the money anymore. It really isn’t. It’s about getting into the arena, with a miracle team. That happens. There are miracles that happen because of the chemistry of the people.

LEO: You’ve played a number of iconic action and sci-fi characters, but I’d like to talk about a role that got away. You were supposed to be “The Terminator.”
LH: Yeah, that’s true. You know what, I’ve never looked back. I mean, even God can’t change the past. When that happened, I really didn’t care, because I was in the movie anyway and enjoyed being in it, working with Jim (Cameron). But, you can’t cry over what you didn’t get.

LEO: Still, it’s kind of injury to insult — Arnold ends up blowing you away with a shot gun and machine gun! What’s Cameron’s problem with you?
LH: Funny thing on that. The squibs went off, and I had never dealt with squibs. Those particular ones were pretty strong, and I laid my arm over my own chest and the squibs went off. Black and blued the inside of my arm. It was my mistake, but it’s always an adventure!

LEO: Speaking of adventures, tell me about “Pretty Good for a Human.”
LH: That’s a line out of “Aliens.” I called Jim and asked if I could use it, and he said he’d be honored. The book is about never giving up and kind of happened by accident. Joe Maddrey and I wrote it. Halfway through, I decided that the only way it’s going to work is if I get really honest. And we did, and it’s resonated with a lot of people.

LEO: And “Bring Me the Head of Lance Henriksen”?
LH: It’s a television series about ageism in the industry. It’s already shot and is very, very funny. Completely improvised, the whole thing. John Woo said something to me when we were shooting “Hard Target.” He said, “Lance, I’m really worried about you!” Because I wouldn’t let go of the role and was playing a real killer at the time. He said, “I want you to go do some happy, fun movies.” So, I’ve been looking forward to playing fun stuff, like this show.

LEO: A critic writing about “It’s in the Blood” said, “Someone forgot to tell Henriksen he’s not a young man anymore,” in regards to the role’s physical nature.
LH: I’m a Viking. First generation Norwegian. Vikings have been known to row across the Atlantic in an open boat — so, it’s in the genes.

LEO: Your résumé lists 25 releases between 2011 and 2012. Is “Lifetime Achievement” a bit premature?
LH: It is a bit premature. I accept it as a nod of affection of some kind. And how can I not feel happy about that? I do. It’s very gracious of them to do that.