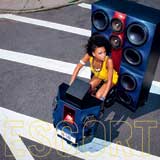 Although some of the tracks on this collection were first released as long ago as 2006, this is a remarkably coherent collection from the New York-based collective. This is party music, taking influence from all over the disco spectrum: the catchy hooks of Philadelphia-style roller skate funk, the horns of New Wave, and atmospheric European-style synth work. It never gets dull or irritating and, although some may call this summertime fare, it actually comes along just in time to serve as an antidote to the saccharine holiday music and dirge-like ballads that we have just been subjected to over the last few dark, Bublé-filled months. Standout tracks include “Starlite” and “Cocaine Blues,” and, while both are chock-full of references, winks and nods, the listener doesn’t necessarily have to be a disco scholar to enjoy Escort’s take on the genre. The production, arrangement and songwriting combine to make this a truly joyous record.