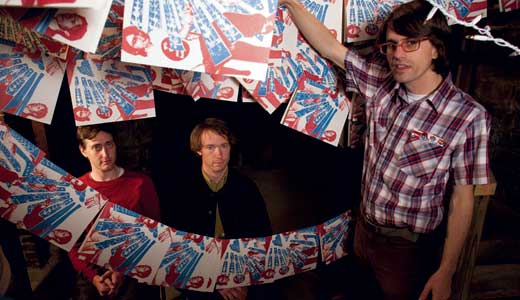 For some people, Joe O’Connell might be the best songwriter in the whole world, and they’ll stand on Bob Dylan’s coffee table in their cowboy boots and say that.

So why isn’t he more of a household name yet? His music as Elephant Micah — a name used both solo and with rotating accompanists — is a modern, DIY take on early 1970s folk mixed, at times, with bursts of electric guitar textures. It’s accessible, beautiful and would likely find a larger audience if given the conventional promotional push.

For O’Connell, who self-releases his music, one reason for Elephant Micah’s slow path to wider recognition has been a reluctance to play by the rules established by his industry. “New artists starting out now probably don’t have ambitions of having some decade-long career doing obscure self-releases,” he laughs. “Most people looking to get attention for their music are actually trying to be part of the bigger indie label system. I don’t see it as two separate options, though. I’m not really setting out to ennoble one and vilify the other. What I am into is the idea that you can mess with the model of what a recording artist does, and how they get their work to people.”

Another aspect is his desire to stay in control of the music itself, especially when other options are unappealing or inaccessible. “Most of the musicians that I know are in that position. The gatekeeping to participate in the more visible indie world is so pronounced and so impossible to navigate that the musicians — the people who are considered my peers — have all found it a waste of time and are looking for ways to be a little more self-reliant.”

Finding social media to be more of a distraction than a facilitator, O’Connell sells his catalog through his own site and through Bandcamp. His loyal audience receives emails alerting them to new recordings; he doesn’t want them to have to work as hard as he does. “More and more, I want everything I record to be available by donation. I’m actually surprised that more people don’t do that, especially those who are not in the position of being part of the industry status quo approach to releasing music. Otherwise, it’s like the artist is in more of the role of a gatekeeper, trying to control access to their music. I’m more interested in trying to increase that access and less interested in trying to control it. I think that’s good for everyone involved, the audience and independent artists who are relying on their audience in a more direct way for support.”

Elephant Micah’s new album, Louder Than Thou, was released this week, though the songs were written in 2008. “The experience of playing it back now, it’s a little bit disorienting — the way the finished thing refers back to each layer of work that you put into it,” O’Connell says.

“Because I’m mostly doing everything myself, really involved in each step, each of those steps producing a record is really intense. Or like an intense memory. Hearing the record is like this time-travel experience of all of the triumphs and all of the failures of trying to put it together,” he says with a self-deprecating laugh. “But I’m trying to be funny, I don’t mean that in any earnest way.”

O’Connell had help from longtime collaborators and brothers Justin and Nathan Vollmer on this album, made in his current home of Bloomington, Ind., and he says he’s trying to make recordings of newer songs more quickly now. A native of Pekin, Ind., the former Louisvillian hesitates to make comparisons between his musical experiences in each city.

“In some sense, the people that I know in Louisville have a shared interest in folk and country music and acoustic music. My experience in Bloomington has a little more to do with … sort of rock,” he notes. “I’m really interested in playing loud music with electric guitar and drums, as well as I’m really into country and bluegrass and all that stuff.”