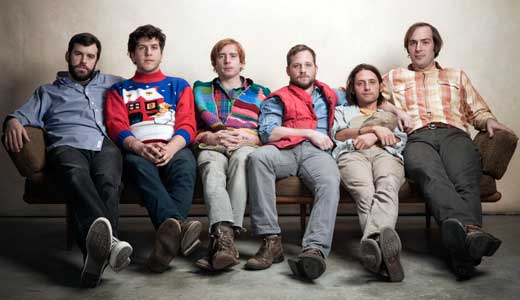 Since Dr. Dog released its previous CD, Shame, Shame, in 2010, many things have changed for the band, as drummer Eric Slick has taken over for Juston Stens, and percussionist/multi-instrumentalist Dimitri Manos has joined the lineup.

This might not seem like a seismic evolution for the band, but singer/guitarist Scott McMicken says it’s hard to overstate the impact the two newest members have had.

“They both have brought a lot more depth to our performances, sonically and rhythmically, dynamically, as well,” McMicken says. “Eric is such an incredibly talented drummer, and he just really pushes things along, which is so important. As technically proficient and sort of virtuosic as he is as a player, he also really understands that fundamental role of the drummer, which is to make people move.”

Manos has expanded the group’s sonic possibilities with his percussion work, his ability to play acoustic guitar, and his talent for crafting sound effects and other sonic elements. “The palette of sounds that he’s working with is so wide that the spontaneity of it is really refreshing every night,” McMicken says. “And he can achieve so much with very absurd sounds.”

That same sort of impact extended to recording of the new album, Be the Void, where McMicken says the talents — and personalities — of Slick and Manos influenced the vibe of the project. “The calm, the creativity, the technical proficiency, the rate at which we were able to get to the point of an idea for a song, all of those things were just firing on all cylinders. It was so fulfilling working with those guys.”

That sort of upbeat analysis is a real switch from Shame, Shame, which saw the band clash with producer Rob Schnapf, who would have preferred that the group had its songs more developed than they were when recording began.

“We still showed up with a bunch of songs that we’d never played before,” McMicken explains. “And you don’t do that unless you’re going to sit and take the time to arrange them in the studio and stuff. I don’t think Rob is used to working that way. He’s used to working with bands that have at least a certain sense of what the songs should be.”

Going into Be the Void, Dr. Dog planned to return to self-producing — something the band did on its first four albums. But then Ben Allen (who has produced Gnarls Barkley and Animal Collective) reached out to the group, and that notion changed. The band did a brief initial recording session with Allen, and actually planned to have him produce Void until McMicken had a last-minute change of heart and convinced the rest of the band to self-produce.

“It could have worked wonderfully to work with Ben. I’m sure that it would have,” he says. “So that really wasn’t the issue, the fear of working with him. It was more, ‘We don’t really need to do this.’ I just feel like we have enough ideas and enough (experience) doing this on the table that we really kind of owe it to ourselves to see this through in our own light.”

Now it’s time to take the new material on the road, and once again, Dr. Dog is doing something different — this time with its live presentation. The first tour behind Shame, Shame featured a fairly elaborate light show that made it the biggest production yet by the band. Now Dr. Dog has gone back to more of a do-it-yourself kind of stage set.

“Basically, the concept was to build what was to look like just a real cozy living-room atmosphere,” McMicken says. “We’re going to have things like clocks and coat racks and blankets and furniture and rugs — just try to make it look like we’re playing inside of your grandmother’s living room. We’re not working with big moving lights or a technological show necessarily, but we’re still trying to achieve that visually stunning kind of thing.”