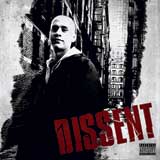 After dropping his smoke-filled, ahem, joint EP with T-Razor earlier this year, Dissent comes as a full about-face, a politic-filled project that doesn’t come off as overly cynical, sarcastic or dependent on Pale Horses and other conspiracy theory. Produced by Ghost Beats, these eight songs are among Johnny’s best. “Hate Me” is as much an attack on the powers-that-be in the music industry as on Wall or any other street, the massive track full of nasty drums and screaming guitars. “Where It Came From” has a ridiculous beat whose simplicity should invite other up-and-comers to want to add their own 16. The tracks are blended with lifted segments from a handful of comedians, including that ketchup-loving president so adored by Alex P. Keaton. That Spanish can show such diversity between projects is impressive; that both sides sound equally credible from him is a tribute to just how far he’s come. His sing-song hooks are still of the love-hate variety, but if you’re on the same side as me, you’ve become a believer. Johnny Spanish is ready.