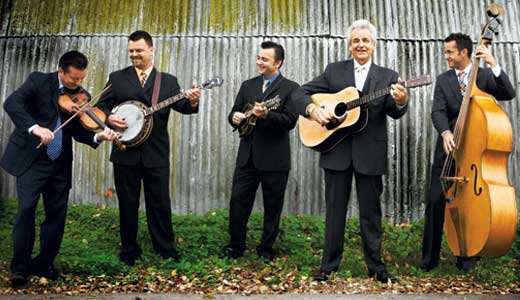 Born in 1939, Del McCoury has more energy than a person half his age. Though he established himself in the bluegrass world by the age of 24, singing and playing guitar for Bill Monroe, the Nashville resident didn’t break out as a star in his own right until the early 1990s, when he was in his mid-50s.

McCoury attributes some of his staying power to his openness to trying out different sounds with unexpected collaborators. “It’s exciting, because I think it’s good for musicians; they get to hear different things, and hear the same thing in a different way, even. It’s variety — a variety of things that keep your interest up. I think that’s really important in music. I think a lot of people get tired of what they’re doing. I never did, but I can see where you would.”

McCoury likes to take requests and never performs the same show twice. “Sometimes people request songs that I haven’t done in a long time. It keeps me on my toes, and keeps my band on their toes — and they know this stuff better than I do, because I have to sing the words, and I might forget ’em,” he says with a laugh.

The band today includes his sons Ronnie McCoury on mandolin and Rob McCoury on banjo, bassist Alan Bartram and fiddler Jason Carter. In their free time, the four younger members have their own spin-off band, The Travelin’ McCourys.

Past collaborators have included Phish and Steve Earle, and the 2011 album American Legacies found the Del McCoury Band paired with the legendary Preservation Hall Jazz Band of New Orleans. McCoury had been asked to sing a few songs for a tribute album to benefit the musicians who were affected by Hurricane Katrina. “We got to know each other, and one thing led to another, and we thought, ‘Ooh, let’s start playing some dates together.’ And then we thought, ‘Well, why don’t we do a record?’”

The two bands’ touring schedules aligned in San Francisco, where they recorded in a studio that had previously been a mission. “We went in there for about two or three days, just singing any good song that anybody would come up with. We didn’t rehearse anything before the time when we were gonna record. We just ran through things that we thought might work, and that’s the way it came about. It didn’t take long.”

The musicians quickly found common musical ground, realizing that early jazz, Dixieland and bluegrass songs were more alike than many realize today. One of McCoury’s sons asked some Preservation Hall band members, “Did you know Bill Monroe used to come to New Orleans when he was young, and did this song ‘Muhlenberg Joys’?” relays father McCoury. “They said, ‘No, it’s ‘Mullensberg Joys’ … I always figured it was a mandolin tune that Bill recorded. Somebody told me that he was in the hospital from being in a wreck, in the ’50s, and he heard this particular tune on the radio. He recorded it from memory. And he didn’t record it in the ’50s, he waited until, gosh, I think the ’70s. But there’s a lot of that, a lot of them are standards that came from there, from those old jazz tunes.

“From playing with these guys, and hearing things that the early bluegrass musicians — they may not have played the same things, but they were playing some of the same riffs, and it came from horns. If you had told me that 30 years ago, I would’ve said, ‘You’re a liar,’” McCoury laughs.

Though his band’s latest album, Old Memories: The Songs of Bill Monroe, looks back to his tenure with the father of bluegrass, McCoury and sons have refused to be limited by their genre, working with jam bands like Donna the Buffalo and The String Cheese Incident, and the Sacred Steel group The Lee Boys.

The Del McCoury Band with The 23 String Band