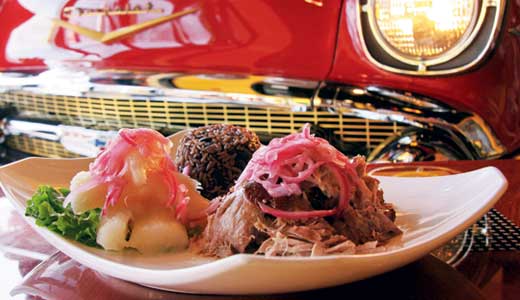 What’s so Cuban about the front of a ’58 Chevy? Simple: You’ll likely find more American cars from the ’50s still running and on the road in Cuba than anywhere else on Earth.

Thanks to the trade embargo that has existed between the U.S. and Cuban governments since Fidel Castro’s 1959 revolution, Cubans may only buy and sell cars that were already on the road when Castro came to power. According to The New York Times, there were some 150,000 American cars in Cuba when Castro took over, and perhaps as many as 60,000 vintage autos (called cacharros) remain, most of them held together by baling wire and ingenuity.

So when you look into the large shopping center space that houses Havana Rumba’s Middletown branch, don’t be surprised to see a vintage General Motors grill and headlights looking back. It’s not a retro remembrance of a nostalgic malt shop of the rock ’n’ roll era but a salute to the Cuban spirit that remains indomitable after all these years.

If you like the original Havana Rumba in St. Matthews, which has been around since 2004, chances are you’ll like the newer spot in Middletown. It’s located in the modern shopping-strip space that once housed Pig City Barbecue, and just to keep the restaurant news ticker ticking, it’s just down the block from Simply Thai II, which dropped in recently where Mazzoni’s rolled its last oyster some time back.

Havana Rumba has laid down a touch of Cuba over the bones of Pig City, choosing decor that matches the other venue: comfortable leather-and-wood taburetes, chairs made by Cuban-American producers in South Florida; genuine Havana cigar-box labels laminated into the heavy wood tables; and a few tobacco-leaf fans almost lost against the tall black ceiling. Conga drums make stools for the cozy bar, and an energetic musician provided live entertainment with his bongos, vocals and, apparently, a digital Cuban-band backup.

The menu is extensive and offers a full tour of Cuban cuisine. It’s adaptable, with a good selection of about 20 starters, including salads and hot, cold and mixed tapas that you can choose as appetizers or combine to build a selection of small plates for grazing. Affordable prices range from $5.99 (for a Rumba Caesar salad) to $8.99 (for a Cuban sampler tapas plate including a stuffed potato ball, a chicken empanada and a pork tamale). Mixed tapas platters made for sharing run $18.99.

About two dozen dinner entrees and bocaditos (sandwiches) start at $7.50 (for pan lechon, a Cuban pork sandwich) and top out at $15.99 (for steak chimichurri) or $30.99 for two (parrilla Habanera, a mixed grill of palomilla steak, roast chicken, Spanish chorizo sausage and sides).

A somewhat condensed lunch menu offers smaller portions of dinner favorites for smaller prices (mostly $8.99 and below), and sandwiches for a dollar less than the dinner price. There’s full bar service including mojitos, tequilas and such; a short wine list features mostly wines from Spanish-speaking countries in the relatively affordable $20 to $40 range, generally from $6 to $9 by the glass. The beer list also offers standard-brand domestics, a couple of local bottled beers and a selection of Latino brews.

You’ll get no tortilla chips and salsa here, but something just as good hit the table as soon as we sat down: feather-light, crisp-crusted Cuban bread, sliced and warm, with a ball of garlicky herb butter. We doubled down with a daily special appetizer, guacamole ($5), and got a wink and a smile from the server when I pointed out that this Mexican treat isn’t exactly Cuban. No matter, it’s popular, and I guess that’s why it was on the menu. It was good, too, rich and smooth, garnished with diced tomato and a sprig of cilantro, with a pile of mariquitas (crisp, paper-thin chips sliced lengthwise from plantains) for dipping.

A cup of frijoles negros (black beans, $3.50) made a delicious starter, with tender black beans — a Cuban favorite — swimming in a thick, savory black broth topped with a ration of fine-chopped white onion.

You can’t get barbecue at this location any more now that Pig City is gone, but lechon asado (roast pork, $13.25) makes a reasonable substitute. Long-cooked, citrus-marinated pork fell into shreds, just like pulled pork, and it went well with tender white yuca (manioc root) and congris (Cuban rice and black beans).

The Vegetariano Press ($7.50) is a meatless version of the Cubano sandwich, a hot-pressed loaf of Cuban bread loaded with lettuce and tomato, onions, and layers of thin-sliced grilled zucchini and yellow squash, roasted red peppers, pickles, mild white cheese and a smear of dijon and garlicky aioli. It came with crunchy, addictive sweet-potato fries with seductive smoked honey for dipping.

We wrapped it up with a delicious flan de coco ($4), a tasty variation on the Spanish classic, a round of creamy caramel custard built on a base of shredded coconut, garnished with strawberries, blueberries, dulce de leche, a dab of whipped cream and a crunchy, chocolate-filled pastry straw.

An excellent Cuban dinner for two, with a Quilmes Argentine beer, came to an affordable $40.02.