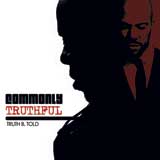 Louisville-by-Saginaw transplant Truth B. Told doesn’t label himself as an MC or a poet. “I’m an artist,” he simply states. The musical foundation of Truth’s new record takes its cues from its title, Commonly Truthful, and the resulting familiarity of the material could be a blessing or a curse: If Truth doesn’t come correct, and at least match what has come before, the disc risks coming off as a cheap, low-budget rip-off. This is not the case here. The disc’s centerpiece is “Dear Amber,” a Nina Simone-sampling response to last year’s viral video of a young girl whose sexual escapades were taped. A response to the lack of outrage, delivered from the perspective of a father, the song has power. The message deserves listeners, a conversation. If only messages attracted as many hits as exploitation.