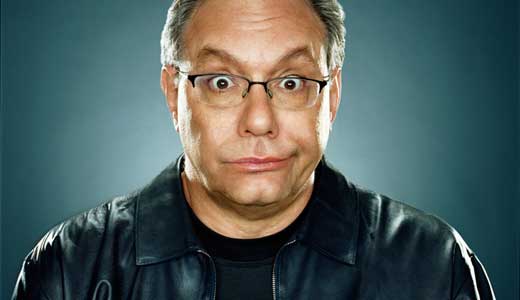 If you don’t know who Lewis Black is, then you’ve probably been living in a cave in the south of France for a millennium and a half. He’s one of the most renowned comics in the business, and he’s been ranting and raving all over television and movies for the better part of two decades. This Sunday he’ll bring his “Running on Empty” tour to the Brown.

Lewis Black: I’m looking forward to coming back to Louisville.
LEO: Yes, the home of Mitch McConnell.
LB: That’s right, it is. He keeps nuts and berries in his cheeks. I did this congressional correspondents’ dinner, way back when Bush was president. I looked down and Mitch McConnell was sitting at the table with him, and he never cracked a smile once; it was very awkward. One of these days, I’m going to get in his line of sight and make him feel how he made me feel.

LEO: I think you should set up a lunch with him while you’re in town.
LB: I don’t wanna sit down with him … anywhere … for any length of time. Everything that comes out of his mouth is beyond ignorant. I don’t know who he’s talking to — not people on this planet. He’s relaying secret messages … the good people of Kentucky, in their infinite wisdom, must have sent that alien to Washington for a reason.

LEO: Have you been following the Republican primary?
LB: It’s beyond belief. Seriously, it seems we’re getting to a place that’s beyond fiction. What are they doing? How do they expect to pull anyone to their position when they can’t find anyone to seriously represent their position? They’re talking to themselves, much like the Democrats do. They’re idiots.

LEO: Has the Tea Party fucked the Republicans over?
LB: The Republicans basically saw this idiocy coming down the road and decided to follow it. These people elected from the Tea Party are saying, “Umm, I’m supposed to fight communists; that’s what I’m supposed to do while I’m here.” No! You came to Congress representing the allegiance of your constituency, with the bridge of 500-some-odd other votes to work with. It’s got nothing to do with government.

LEO: You live in New York, but you keep a place in Chapel Hill, N.C. Why?
LB: I get a lot of writing done there, I think because that’s where I went to school, and it’s basically the last time I ever did any real work.

LEO: Your stage persona is often angry. Do people confuse the real Lewis Black with the angry guy on stage?
LB: Sometimes they do. About a third of the folks out there who see me assume I’m going to go off at any second.

LEO: Do you have to explain you would have a heart attack if you were really that angry?
LB: I tell them I would be dead in two days.

LEO: Your last album was a vault release, recorded back in 1992. You don’t see comics dig into the vault like that very often. Why did you choose to do that?
LB: Because I thought it was a good idea. Before, I didn’t think it was such a good idea, because I wasn’t sure how people would take it — to see how comics grow over time … hopefully. And, in another respect, I wanted to show that nothing’s changed. The only things that have changed are some of the names. There was an oil spill in the Gulf, we’ve got a guy going to war in Iraq. It’s beyond belief. It just doesn’t change.