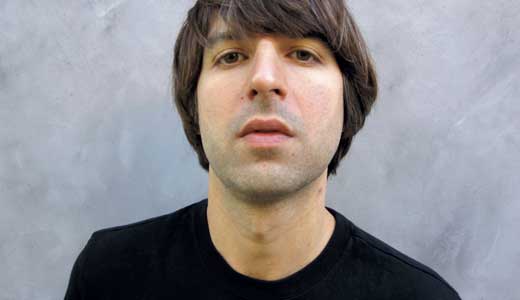 Law school dropout Demetri Martin has thrived in comedy — landing TV specials, albums, a recurring spot on “The Daily Show,” his own series, starring in the movie “Taking Woodstock,” and writing a best-selling book — and at 38, he’s just getting started. LEO spoke with him as he drove on his “Telling Jokes in Cold Places Tour.”

LEO: Usually a headliner does a weekend. Why do we only get you for one night?
Demetri Martin: I’m doing a TV taping on the 18th of February, a stand-up special. I haven’t done one of those since 2007, so I wanted to do a bunch of shows and get ready for that. We just found places that I felt would be fun to run the set, try out new material and lead up to it.

LEO: How’s the new material going over?
DM: Really well. I haven’t had a chance to focus exclusively on stand-up in quite a while. I wrote a book, I’m writing a pilot — an animated show for Fox — I’ve written a couple of screenplays, and had a couple acting jobs. It’s been cool to get other things, but now I get to go back to what I do most, which is stand-up.

LEO: Zach Galifianakis has, like you, been using sketch pads in his stand-up for years. Is there something about Greek-American comedians that makes you guys more visual?
DM: (laughs) Maybe! There’s Zach, me, Tina Fey’s Greek … there aren’t that many of us, especially in comedy. We have to reach. I have a lot of Jewish friends, and that list is amazing — they have Einstein (laughs). We have Telly Savalas, who a lot of people don’t know anymore. John Stamos.

LEO: Comedy Central has given shows to a number of talented people who seem to walk away unhappy with their experience. Did you have problems with them creatively?
DM: The creative side, they were pretty good to me. Marketing it was always a real struggle — how to promote the show and myself, as a human being. You get a sense that they’re not interested, like, “We know how to sell stuff, and we’re going to sell it, and that’s how it’s gonna be.” But, on the Comedy Central scale of dealing with people, they were pretty nice to me. When it comes to business, they’re pretty notorious, pretty tough. They’re not too amenable to compromising too much. But I can’t really complain; I got to do a lot of stuff. I got to do my series.

LEO: Is your goal to have a career like Woody Allen’s?
DM: If I could have one-tenth of his career, I’d be lucky. I always think of Woody and Albert Brooks. There’s two examples, and rare examples, of people who develop a specific sensibility and they’re able to tell stories — and in different media. On the page, in films, stand-up …

LEO: Were you able to learn from some of the directors you’ve worked for?
DM: Yeah, the few movie roles I’ve been able to get, those have been really educational. I got to be on a set with Ang Lee and Steven Soderbergh, and that was really cool. There’s so much information to absorb while you’re there, even if you only work a couple of days. And doing my series, two seasons of that, was really helpful. That taught me a lot about getting through a production day, all the moving parts, and also budgets, which is really not my strong suit at all.

LEO: Is it true that you were up for the part Jonah Hill played in “Moneyball”?
DM: Yeah. I was attached to the part when it was with a different director. I worked for a day with Soderbergh and Brad Pitt, it was really fun — and then the next day, the movie was shut down.

LEO: You picked the cities on this tour. Was there anything about Louisville that appealed to you?
DM: A couple things. No. 1, I’ve never done stand-up in Louisville. I’m certainly interested to see who shows up and how it goes. No. 2, it worked well with routing. No. 3, I dated a girl a long time ago from Louisville, and she was really cool. That’s not very relevant to stand-up, but it’s nice.