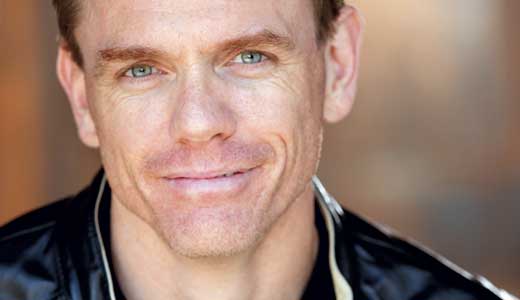 Christopher Titus is one of the most harrowing comedians in the world. His critically acclaimed one-person show, “Norman Rockwell Is Bleeding,” fearlessly touched on taboo subjects, from his alcoholic, verbally abusive father to his mother, who killed her second husband and then turned the gun on herself. Amazingly, he brings the audience to a place where it’s acceptable to laugh at such tragedy — mostly by gauging your own against his. He brings his latest show, “Scarred for Life,” to The Improv this weekend.

LEO: Was your material this personal at first, or did it take you a while to delve into the comedy in your tragedy?
Christopher Titus: For 12 years, I sucked. I was a decent comic and I worked a lot, but I have to be honest — my act sucked. Just lame stuff about waking up in the morning. I was about to quit comedy when a friend of mine told me, “You know that happy guy you are onstage? I don’t know that guy. I’ve never met that guy. Tell people who you really are.” So I wrote this bit called “We Need Comedy to Get Rid of Our Desire to Kill” — it was basically to stuff it up his ass and let him know he was wrong. It was a piece that, at the end, I’m stabbing my boss in the chest with a letter opener yelling, “I just need a good laugh!” I did it and the audience loved it, then I dropped back into my normal material because that was the only piece I had like that, and they fuckin’ hated me.

LEO: After a certain amount of personal tragedy, does one get numb to it?
CT: Yeah, isn’t that sick? It’s like I need a two-year space to write topical stuff while the next horrible thing happens in my life, so I can write about that.

LEO: Is there anything that’s been too personal for you to talk about on stage?
CT: My sister’s suicide is a really tough one. It’s real personal. She was raised by my mom and had a real tough time. And I don’t know how much funny there is in it. With my mom’s suicide, I had my dad to bounce off of — but my sister’s, it’s a tough one … if it’s just a goofy bit about my sister’s suicide, which would never work, I won’t do it. If I can figure out a way where it makes sense and is gonna make a difference somewhere, then I’ll do it in a second — I’m a whore, of course I would.

LEO: Your childhood was fairly traumatic … I’m wondering if it seemed traumatic at the time, or did you think everybody’s family was like this?
CT: That’s the weird thing; I didn’t know my life was messed up. My mom took me to bars with her — my bedtime was last call.

LEO: You have talked a lot about your parents over the years — your mother’s schizophrenia, your father being judgmental or cruel. In retrospect, do you think they loved you?
CT: Oh, yeah. Mom was just crazy, at the end of the day. It took me years to get to that point … she wasn’t mean, she was just crazy. And my father was raised by a tough dad, too … he raised me tough because he didn’t want me to be a loser. But because I’m over it, it’s allowed to be funny. If I wasn’t over it, I would just be some dude whining. And we have too much of that in this generation.

But let’s say it was malicious. Let’s say they hated my guts. How does that help me now? If all I did was think about how my parents hated me and wished me dead, then I would just go through life being a douchebag. But my dad loved me a lot — without my dad, I wouldn’t be able to handle stand-up comedy. Without my dad being who he was, I never would be a good comic, I wouldn’t have the balls to do it, I wouldn’t have the tendencies built to not care what the audience thinks, and do what I want to.