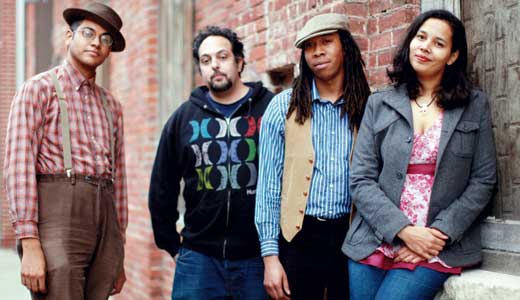 Dom Flemons harbors a deep respect for Louisville’s unsung history of jug band music. “People like the Memphis Jug Band and Cannon’s Jug Stompers get a lot of press,” says the Carolina Chocolate Drops multi-instrumentalist, “but the Louisville jug bands are a different level of good. You hear some of that stuff, and they’re really playing their instruments like a real band, like an orchestra, and it’s just, ‘Wow, this is some good shit.’ Clifford Hayes and Earl McDonald? Whew, my God.”

His interest extends beyond the music. “I’m a big fan of a lot of the history and culture of Louisville,” he says. “How the Kentucky Derby was a strong part of black Louisville and, over time, that’s been forgotten. That fascinates me, interests me and makes me want to get out there.”

Carolina Chocolate Drops have come a long way in six years. Three strangers from different corners of the country met in a Yahoo! group, then at the doorstep of fiddler Joe Thompson. Flemons, Rhiannon Giddens and Justin Robinson released a couple of albums on an indie label before Nonesuch came calling for 2010’s Joe Henry-produced Genuine Negro Jig, a new classic in a genre not known for “new” anything.

At the end of that album’s tour, Robinson decided to part ways, and Adam Matta and Hubby Jenkins joined. The group’s latest, Leaving Eden, takes its name from one of the album’s highlights, but also strikes a deeper chord. “Our popularity is growing. Not that that’s bad, but with more popularity comes, like Biggie said, ‘More money, more problems.’ Your lifestyle changes; Rhiannon has a baby, I have a wife,” Flemons says. “But as we have been elevating on the musical level, we’re starting to reach into the bigger pond of music.” With personnel and business changes, the band couldn’t help but wax poetic. “It’s sad, but progress has to happen, just like the original story of Adam leaving Eden. We don’t love Adam having to leave Eden, but where would that leave any of us?”

The new album, produced by Buddy Miller, has an immediacy that Flemons appreciates. “We came up with a lot of the arrangements right on the spot,” he says. “There’s just a lot more spontaneity. With Buddy, we made a point to record a lot more stuff live, all in one room. We wanted to get a really live and vibrant sound — that’s something that Buddy did really great. We hit that mark.

“The best way, when handling this material, is to remember that it is being performed for an audience,” Flemons says. “So no matter how deep you get in your head about the history or the significance of the music, it still has to remain entertaining to the people that you’re playing it for.”

By keeping the music alive, the Drops hope to add awareness of the history, as well as the fun, of their material. With Eden dropping near the same time as the online debut of the Alan Lomax archive, Flemons is hopeful. “I can’t wait for it to happen. It’s exciting to be side by side with that archive. It’s amazing that Alan Lomax came up with something that technology has finally caught up to. With good fortune, it’ll change the world like it did 50 years ago. We may have another interesting folk revival, a digital folk revival. Something will happen; sparks will fly.”